CLOSE
Home Life Retro Photo of the Week: Starting Over 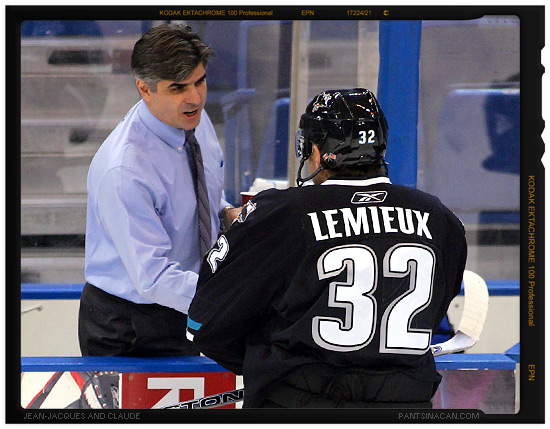 It’s been a trying week at work, so I haven’t been posting much. This post will probably disappoint. Hey, just warning you…

This is 4-time Stanley Cup Winner Claude Lemiuex and he all but retired after the 2002-03 season when no one offered him a contract.

He’s now 43 years old and playing in the minor leagues working towards a comeback.

I’m pretty certain he’s realistic about his prospects, I mean, he’s made millions of dollars as a professional athlete and can’t possibly need the money — but he’s chosen to sign a contract with a team that will having him riding a bus (rather than a chartered plane) to cities like Rochester, Syracuse, Bridgeport, and Norfolk.

Not exactly major league accommodations either.

If he reaches the NHL again, and I think he might, this will most certainly be his final season.

There isn’t a lot left in the tank (though he’s skating circles around players half his age), he knows that, but I think he just wants to go out on his own terms — and not be forced out due to his age.

Shaking hands with Lemieux is former NHL defenseman J.J. Daigneault. The two were briefly teammates on the Montreal Canadiens, oh, roughly 18 years ago.

Daigneault is now a coach, he’s in the shirt and tie, while Lemieux is still a player — playing with kids who weren’t even born when these two played together.

Anyway, this just shows how important it is to network. Lemieux undoubtedly used his contacts to get this job and, along the way, I’m sure he’s making new contacts with today’s crop of players.

It isn’t often these days that the old timer isn’t pushed aside — in sports or in the office — in favor of the fresh face.

I’ve seen it firsthand — friends getting blindsided — and I’ve got to admit, it weighs on my mind a bit. Okay…a lot.

But I’d really prefer to leave on my own terms someday.

Claude’s making sure that happens.