CLOSE
Home Bargains Photo of the Week: Fake Reindeer in the Snow 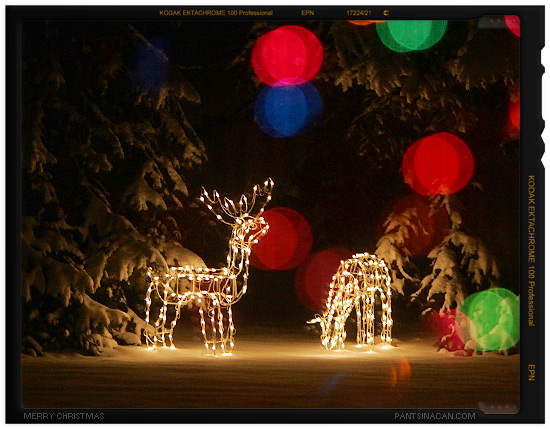 Well, at this point, it looks at though we’re guaranteed a white Christmas this year.

After a foot of snow on Friday, another 6-8 inches forecast for tomorrow, and then another round due on Wednesday, I think I’ll get an entire season’s worth of shoveling in before the end of the year.

This shot was taken from our front window. The deer are across the street and the colorful orbs are reflections of our Christmas tree in the window. Made for a pretty cool sequence of photos.

Hopefully, after tomorrow’s snowfall, the one reindeer’s head will be hidden. That could make for some funny photos.

Speaking of the fake reindeer — I think the first time I ever saw one was about 15 years ago now.

I remember my parents pricing them out, but the price tag was prohibitive. They had to be over $100 each at the time and if you wanted one that had it’s head move up and down, well, those were over $200.

Now, it seems, or at least for the past few years, it appears that the tacky inflatable lawn decorations are more in style. The resulting good news is that you can now find fake reindeer just like the ones in the picture for around $14.99!

A goofy looking inflatable nativity scene will still run you $90…

Mortgage Gamble – From Winner to Loser