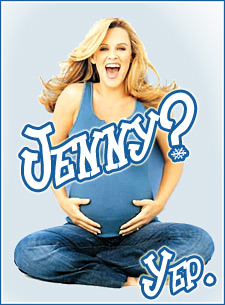 Silly, but we’re actually using that goofy applet over there on the right to keep track. No, really. That’s what we’re using.

As of today, it says we’re 140 days in and have 140 more days to go. Of course, if you’re reading this tomorrow (or the next day or the day after that), it says something completely different.

No matter what, as painfully exciting as it is, it still seems like a *really* loooooonnnnnggggg way to go…

To pass the time, or prepare, actually, we’ve been reading a bunch of those eerily similar pregnancy books. I’ve found that most of them are horribly negative and I’m beginning to understand why every single woman claims to have had a “difficult” pregnancy.

Yeah, that’s right, I’m one of those guys at work who rolls his eyes every time a group of women start bragging about how their pregnancy was more difficult than anyone ever since the dawn of time — it’s like it’s a competition or something…

The books, primarily geared towards women, are mostly to blame. They are nothing but doom and gloom.

The doctors, from my perspective, aren’t any better. Everything is a problem…or has the potential to be a problem. EVERYTHING!

It’s preposterous. I mean, seriously, there are an awful lot of people out there having perfectly healthy babies. Even the crack-whores are doing it.

Pregnancy can’t possibly be that treacherous…

One book, or author, that’s stood out so far has been Jenny McCarthy.

Weird, really, if you think about it (and you know who she is), but her books are the only ones that we’ve come across where they tell it like it is and just advise you to roll with it and, well, enjoy it.

She doesn’t dwell on the doom and gloom. That’s refreshing.

The book that I’ve been reading most recently is called “The Expectant Father” by Armin A. Brott and Jennifer Ash.

It’s not very good — just a hodge-podge assembly of a bunch of brutally obvious stuff that’s been fully covered in the books more geared towards women. The “man” slant they put on things is minimal. Really, it’s just like all of the other books, just with a dress shirt on the front.

The book does devote an entire chapter to money though. Month 4, the month we’re in right now, is apparently when I’m supposed to wonder if I can afford this…

Um, a little late for that, don’t you think?

Anyway, the advice isn’t very sound so I won’t go into the details. Perhaps it’s because the book was originally published in 1995 (with an update in 2001).

And seriously, when the baby is still negative 5 months old, I’m not exactly worried about paying for braces.

One passage in the book that I did enjoy with was in the chapter for the seventh month (yeah, I got ahead of myself…). It’s regarding the difference in how men and women visualize the coming baby:

Pregnant women generally dream and fantasize about babies, while expectant dads tend to imagine themselves with three- to five-year-old children. That was certainly true for me. In almost every dream or fantasy that I had involving children while my wife was pregnant, I was holding hands, leaving footprints on the beach, or playing catch — all things you can’t do with an infant. My wife, in contrast, dreamed of a palm-sized hairless baby who talked to her like an adult.

Wow, apart from the “leaving footprints on the beach” part, that pretty much sums up how I’ve been envisioning things.

On the subject, my wife got upset earlier this week when I mentioned that I was coming to think that the whole “new baby” experience would almost be anti-climactic.

I mean, sure, it will be exciting — we made a person! — but a newborn doesn’t really “do” anything. Will that initial excitement last? Will all of this anticipation be worth it?

I mean, babies just sit there like lumps, don’t they? They don’t even appear to do any tricks… Even puppies can do tricks. Babies? Well, they eat and poop.

Sorry, but from my perspective that short and limited routine will get old really fast…

So my wife made me feel like a jerk, probably rightfully so, but that passage in the book made me feel like I’m not the only father that isn’t exactly looking forward to the first year or so. I even had to read it out loud to her.

Year two, three, four, or five — well, that’s when I imagine the excitement begins. I’ll be able to teach the toddler how to do, um, tricks besides eating and pooping!

I can still do a mean somersault without hurting myself (though there’s always a possibility of a major muscle pull) and I can’t wait to show someone who’s never done one how to do it my own special way.

It’s funny though how it’s as though my wife has had a total change of heart regarding young, young babies. I don’t think she envisions her baby speaking to her like an adult, but I do think she imagines that it will be able to do all kinds of things.

I mean, for years now we’ve silently poked fun at couples we’ve seen bringing their newborns to the zoo or sporting events or whatever.

I mean, really, the baby’s not going to remember any of that. They’re not. The kid is just there for the ride. That’s right, you paid extra admission for something your child is too young to remember. Ha-ha…

Really, we’d laugh about this sort of thing and then declare that that would never happen with us — but now…well, I can already see it on the horizon…

We’ll be at the Bronx Zoo next summer taking our brand new $450 stroller/swing/car seat contraption out for it’s maiden voyage and a very trying day out in public. Oh, how I don’t look forward to that 2-hour car ride home…

But that isn’t to say that I won’t want to leave the house at all during that first year. I will, I just won’t want to pay admission to do it…or sit in the car for hours…

I mean, I’ll find just as much enjoyment taking the stroller out to see if anything has filled all of the vacant Steve & Barry’s yet…

Guess what? They don’t charge admission for that!

Wow… The Banks are Resorting back to Free Toasters…