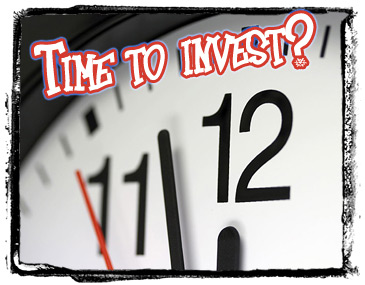 MoneyMateKate pulled the trigger last week and picked up 1000 shares of AIG.

A risky move, no doubt, but an inexpensive one too.

She only paid 51.7 cents per share. Hard to argue with that.

And Trevor from the Financial Nut also made a move, though more conservative (if that’s even possible right now), tossing $1200 at an S&P Index Fund.

In the long run, that was probably a pretty wise investment even if he lost his shirt today.

For me, there’s this guy at work pushing me each and every morning to stop waiting around and pick up a bunch of GM stock — he claims that it’s a bargain — but, so far, I’m not having any of it.

It’s not that I’m afraid or even against attempting to time the market — I think that both Kate and Trevor made wise moves — it’s just that the Index Fund route doesn’t excite me enough and, well, with AIG and GM being the only two companies that I’ve even given some thought about, well, I don’t really think they’re for me either.

Honestly, I don’t think either company even deserves to be in business right now. That’s my opinion.

AIG is $0.53/share as of market close this afternoon. Their 52-week high was $52.25/share. I dunno, maybe it’s a bargain but to me that seems more like a company that’s run it’s course. They’re done.

GM, the big huge American car company, is $1.77/share as of market close this afternoon. That sounds like a bargain. I mean, everyone has heard of GM — and a piece of it can be yours for just a couple of bucks!

I already know, walking in tomorrow, exactly what my co-worker is going to say.

“GM for under $2/share!? They’re too big to fail! The government would never let them fail. It’s a sure thing…“

I think the only sure thing is that GM will fail and cease to exist in my lifetime. Chrysler is toast too.

Neither is too big to fail and both probably should fail.

Further, based on all of the outcry last week regarding all of this stimulus nonsense, the voice from my corner is growing louder.

That’s what capitalism is all about.

Neither company was able to adapt to globalization and, well, other companies passed them by as a result.

Hey, I just noticed that Ford is only $1.73/share… Interesting…

Considering a Hybrid to Save Money? Think again!