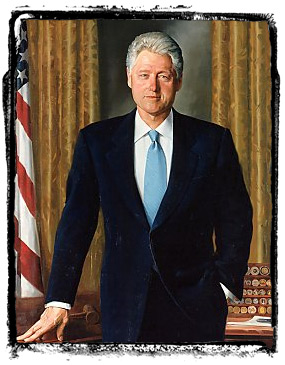 That was almost exactly a year ago. I’m not sure that I imagined that it would tank this badly or for this long.

Or maybe I did.

The line I keep hearing on the news is how the markets “haven’t been at this level since Bill Clinton was in the White House.”

It’s almost as if they expect that little tidbit of info to stir up some dismal feelings or, at the very least, get some sort of reaction, but for me, well, first, the Bill Clinton presidency doesn’t seem that long ago (so it’s hardly a “wow, that was a long time ago” tingle that I’m feeling) and my memories of the mid-to-late 1990’s, financially speaking, are actually quite bright.

I was making a lot of money, I was living way beyond my means, and I didn’t have to worry about the “Axis of Evil” plotting against me just around every corner.

I think that most folks can say the exact same thing.

I dunno, from where I’m sitting, the media are going about this all wrong — you know, if they’re trying to sensationalize a non-story. Like they always do.

If my memory is correct, I’m pretty certain that the NASDAQ was just starting to ramp up with all of the dot.com start-ups in 1996. Politics aside, things were on the up-and-up…

I mean, if we’re really back “there” again, as they seem to be indicating that we are — if even just as a “number”, I’m really looking forward to the next few years.

And I expect the next few years to follow suit — regardless of whether we’re “there” again or not.