CLOSE
Home Life Stereotypes in the Parking Lot… And Christopher Lowell too! 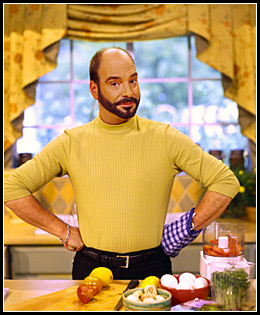 It’s crazy how nice people can be — even if it’s phony.

My wife just happens to be 8-months pregnant right now and I know how you hear about how all kinds of people will come up to you and want to touch your tummy and stuff but, seeing as I’m not the one with the huge protruding belly button, I hadn’t really experienced much of that first hand.

It was Sunday morning and we were on our way to Toys ‘R’ Us to search for, you guessed it, Smurf dolls.

The store closest to home let us down, as it often does, so we were driving across the state to check out the next closest location.

On the way, passing through a town with a much different demographic than any town I’ve ever lived in, at 70 miles per hour, we saw a Burlington Coat Factory.

It looked kinda ghetto but that didn’t matter…

I’ve never bought any clothing there, never even tried anything on but they always have that huge section of good quality towels, curtains, sheets, and crap that you could pay twice as much for if you went to a place like Bed, Bath, and Beyond.

That, and going into a Burlington Coat Factory always gives me the opportunity to do my Christoper Lowell impression which makes me crack myself up every single time…

Speaking of Christopher Lowell… What ever happened to that guy? He used to be on television all the time…

If you’re lost as to why I do a Christopher Lowell impression (funny on its own — trust me) at Burlington Coat Factory, it’s because he has a product line available there and, years ago, it wasn’t uncommon to run into a life-size cardboard cutout of him in the decorative pillow aisle.

So we pulled into the pitted and potholed parking lot.

There weren’t many cars there but a woman had pulled into a parking spot just before us and was headed towards the door.

She was a heavy-set black woman. She had her hair all done up and bling to the max draped across her chest — perhaps in case she encountered one Mr. Christopher Lowell, though, I’m pretty sure he’s not really into the ladies…

She had lose fake 4-inch nails on and some super high heels on too, I dunno, I guess to make her appear slimmer. It wasn’t working. Basically, she looked a little like Mary J. Blige, except 100 pounds or so heavier.

She even had the diva strut and attitude to match.

Realistically, based on first impression, I think I could safely say that we had pretty much nothing in common — besides being in a Burlington Coat Factory mood on a Sunday morning.

Anyway, with that on my mind (not really, at the time she was just the lady in front of us with the huge butt swinging from side to side), we followed her to the interior airlock door (you know, in that space where they keep the shopping carts. I suppose it’s like a mudroom for big box stores), which she tugged.

It didn’t open. She tugged again.

In an accent that I suppose can be considered local, but isn’t a dialect that I would ever use, she openly questioned what time it was.

Being that we were the only other people in the room (airlock?), we assumed that she was asking us. Maybe she was just being loud.

She was pissed — you could tell. She even did that head thing — it was classic.

(Really, I could have put a check mark next to every single stereotype out there — she fit the bill on all of them.)

My wife began to dig through her purse for her phone (neither of us wear a watch) and it turned out that we were all there a good half hour before they would be open. Sigh…

Dejected, we turned around, all three of us, and headed back to the car which was parked one space away from her car — a mid 90’s sedan.

Totally expecting to walk back to the car in silence and continue our planned trip to the toy store, the woman said to my wife, “You look so beautiful and healthy, when are you due?”

Wow — well, that came out of no where…

We shot the breeze on stuff like that for maybe 15 seconds on the way back to the cars.

It wasn’t a long conversation.

It wasn’t very detailed either, just a bunch of fluff (thankfully she never got the chance to start listing off names that we should think about), but even if the entire conversation weren’t really genuine, that woman in the Burlington Coat Factory parking lot went out of her way to be nice to complete strangers.

So much for stereotypes…

As we got into our cars, she smiled at us, lipstick on her teeth and all, and wished us luck. That was really cool of her.

Somehow, though, I think all it was due to my wife looking so bloated.

Okay, a Little More on this Economic Mess…