When it comes to browsers, I tend to hang on to the old standards for far too long.

I was *still* using Netscape Navigator for years after Internet Explorer 4.0 came out.

IE 4, which came out in 1997, was when Microsoft really pulled the rug out from under Netscape. I held off as long as I could but, by 1999, it was apparent that IE was the superior product and I stuck with the Microsoft variant for nearly a decade.

It was only last year that I gradually found myself using FireFox more than I was using Internet Explorer.

I’m not really sure why… Maybe it’s the nifty spell check feature? And, sure, some people claim that one is faster than the other but that’s bunk…

I’d say that so far in 2009, I’ve done 90% of my web surfing using FireFox but, of late, I’ve found that it’s is just one big memory hog — bringing my computer to its knees.

At first I thought it might be because I was running low on disk space. That’s been an problem in the past but that’s definitely not the issue — I’ve got over 200 gigs free.

I cleared my cache thinking that might help — as it used to in the old days — but I didn’t see a noticable difference.

Still, every hour or so, my hard drive would be pegged for 20 solid minutes. It was like I was running a defrag in the background or something.

After a quick check of the task manager, it became apparent that the process slowly killing my computer (to the point that I needed to reboot every couple of hours) was “firefox.exe”. Say what? 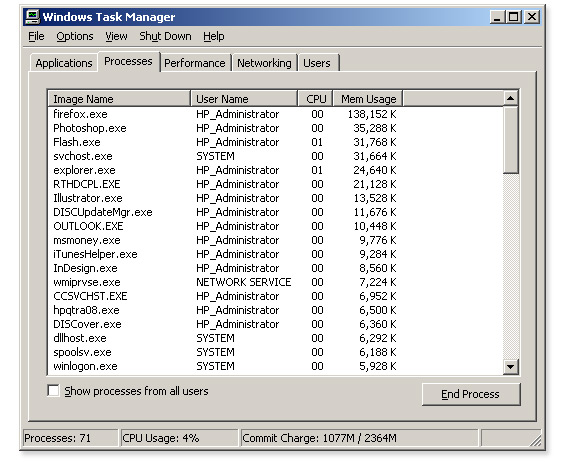 That single window sitting idly in the background is clearly sucking up far more than it’s fair share of my available memory and making everything else I do on the computer a frustrating nightmare.

Really, an idle browser window should NOT suck up more memory than Photoshop, Illustrator, Flash, InDesign, and Microsoft Money (all of which were running at the *same* time and programs that I’d consider memory hogs in their own right).

…and to think I even toyed with the idea of going out and buying a new PC (under $1000, of course) to eliminate the problem!?

Another Step in the Wrong Direction