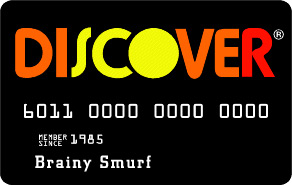 To me, there has always been a social stigma attached to them that turns me off…

See, I’ve only ever carried Visa and MasterCard.

I dunno, those seem to be for people who think that they’re better than those around them…at least that’s what their 1980’s television commercials always conveyed to me…

They’ve softened the message some, of late, but they still have that obnoxious “Always a good decision” Sam Adam’s commercial feel to them… You know the one I’m talking about — the one that Sam Adam’s seems to have had successfully removed from YouTube. Damn them.

Though nearly 25 years old now, Discover is still the new kid on the block.

I remember when they came out. They had that catchy jingle (which oddly escapes me at this moment), a cool sun logo, and an application inside the back cover of every Sears catalog — which, at the time, was second only to the Service Merchandise catalog.

I wasn’t old enough then to actually have a credit card but I was old enough to know that I didn’t really want the one from Sears — the most embarrassing store to be seen with your mother in while shopping for back-to-school clothes..

Now before you start accusing me of contradicting myself as an elitist, there’s a HUGE difference between not wanting to be seen in Sears with your Mom as a 4th grader and acting like a pompous arse with a credit card that touts the idea that “membership has its privileges.”

Of course, AE commercials usually failed to make mention of the fees involved in becoming and remaining a “member”.

So along came the Discover Card. They never had fees. I don’t think they ever denied an application. And I’m pretty sure that they invented “reward” programs too. As a result, they attracted a less than desirable crowd.

Alright, fine, I say it…

Discover attracted the Sears crowd whereas American Express was attracting the Tiffany crowd.

MasterCard and Visa were, I dunno, the cards for everybody else. That’s where I felt that I fit in…

So anyway, back to the additional “reason” that I still chose not to carry a Discover Card.

The fellow immigrant at work frequently peppers me with trivia-like questions about the places I’ve been — many of which he’s been to as well.

He’s not actually testing me, though, I think he’s genuinely interested in what my answers are.

Today’s initial question was, “How many providences [sic] are there in Canada?”

To jeering from my co-workers at my hesitation to this simple question, I timidly said, “Ten?”

Thankfully, this time, my answer was correct.

Of course, one guy (yeah, the type that seems to have snopes.com bookmarked on his desktop to stifle any entertaining conversation that may start up) had to disagree with me claiming that “Google” says that there are actually 13.

Having now had time to count them in my head, I told him that Google is wrong — the three up north are territories, not provinces.

He still disagreed… and, naturally, he’s also the type of guy that wouldn’t be able to name all 50 states either…

Anyway, after defending my knowledge of my home country, the inquisitive one said that Canada didn’t seem much different to him than the United States…

“They have American cars, McDonalds, Burger King, and stuff like that.”

I agreed and disagreed at the same time but didn’t say anything as I nodded.

Then he continued, “But they don’t accept Discover.”

Hmmmmm… I didn’t know that.

After a little research it appears that he is correct — it’s pretty much only accepted at the tourist traps that Americans frequent.

And another reason I’ll never apply for a Discover Card.

…as if the stigma of actually having one weren’t enough on its own!