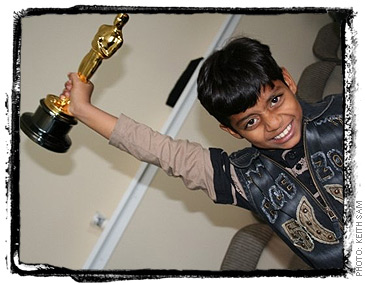 So my wife and I “rented” the Slumdog Squarepants this morning and watched it this afternoon.

Yeah, yeah, I know, the hype surrounding the movie died out months ago but today, while grocery shopping, we made the spontaneous decision to check the selection in the RedBox machine.

We don’t frequent the movies — too expensive — but at the same time, we like to be “in the know” when it comes to, well, pop culture and entertainment news.

See, I know that Kris won American Idol. I also know that Shawn won Dancing with the Stars.

It only seemed fitting that we actually see the movie that just won 8 Academy Awards… including the big mamma jamma, Best Picture.

Now I don’t know about you, but I think that to be nominated for best picture, your movie should have some top notch acting in it.

This one did not.

The acting wasn’t horrible, like a soap opera on Telemundo or something, but it wasn’t exactly great.

I think the best actor in the whole movie was little Ayush Mahesh Khedekar… and he’s not even an actor!?

The acting was right up there with, hmmmm… Rocky? Yep, somehow that won best picture the year that I was born. Yo, Adrienne!!!

In fact, looking over the movies that have won best picture since then, well, see for yourself…

Best Picture Winners of the Past 32 Years

Even among all of those less-than-glowing reviews, Slumdog Squarepants ranks towards the bottom.

Anyway, I made it through the entire movie without losing interest or falling asleep, so it wasn’t all bad. (The subtitles were much too small though…and that gave me a bit of a headache.)

It just seemed a little bit to, I dunno, Tarantino-esque with all of the fragmented flashbacks that were often pretty violent.

The movie was trumped as the “feel-good” movie of the year — I dunno about that. I don’t want to spoil it for anyone that hasn’t seen it yet but, for me, without the big dance number at the end (that was so out of place, it wasn’t even funny), I can’t say that my spirits were lifted any.

In fact, I’m certain that my opinion of India has dropped a few notches.

I’m sure their tourism board is thrilled.

And do you think the US version of “Who Wants to be a Millionaire” operates the same way behind the scenes? It’s almost intriguing to think of Regis Philbin as a ruthless tyrant…

For the record, we also Redbox’ed the latest Batman movie (this overdue pregnancy thing is keeping us cooped up at home) so I can rip it apart all over again.

Photo of the Week: The Great Pumpkin