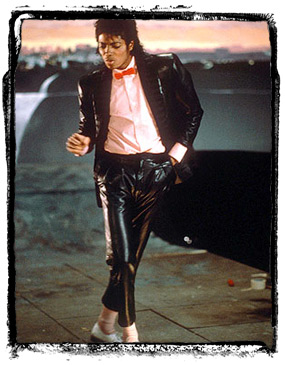 Unlike my previous post, this one actually is about Michael Jackson.

Even though I wasn’t born in the US, if I had been, I’d be one of those bicentennial babies. What that basically means is that the Jackson 5 were a little before my time. But it also means that I was the perfect age for MJ’s solo career.

My parents were still listening to popular music when “Off the Wall” came out in 1979 so I got my share of “Don’t Stop ’til You Get Enough” and “Rock With You” riding in the back of the car.

I don’t remember either song being a favorite (neither could top Queen’s “Another One Bites the Dust” or Christopher Cross’ “Ride Like the Wind”), but I certainly remember hearing them an awful lot.

By the time Thriller came out, sure, my parents had turned the dial to the oldies stations instead but I was six years old by then — I had access to my own radio dial.

Best of all, our next door neighbor was an audiophile. His “band” was the Who but he also had the Michael Jackson album before anyone that I knew. I’m not sure he’d be willing to admit it but he had it in his collection probably the same day that it came out.

We used to go over there, put on his enormous headphones and giggle endlessly wondering what on earth “Ma-Ma-Se, Ma-Ma-Sa, Ma-Ma-Goo-Sa” meant… Back then, you couldn’t just jump to a song as easily as you can now (partly because we weren’t allowed to actually touch his turntable) so we listened to “Wanna Be Startin’ Something” (the first track on the album) more than any other song on the record. In fact, I’m not sure we ever listened to the flip side…

My friend Chris and I even used the “Ma-Ma-Se” thing as a greeting? Weird.

We were living outside Chicago at the time and I remember walking to school with Chris and his older brother Kurt pretending that the sidewalk was lighting up in front of us like it did in the “Billie Jean” video.

I also remember very long sessions of attempting to moonwalk on the kitchen tile with our slipperiest socks on. I never quite mastered it.

I remember the hi-fi guy, Kurt and Chris’ dad, saying that it was a fake special effect but we kept trying anyway…

As 1st graders, we had no idea what the song, “Billie Jean”, was about but we certainly knew all the words. When “Beat It” came out, well, game over, everyone that I knew was asking for the Thriller record for their birthday.

I got it on tape that summer — along with a tape recorder.

Then we moved to Connecticut and my access to Hi-Fi music was dashed. But with the move to New England came something new — cable television and MTV.

Not only could I listen to MJ, now I could see him too! I’d seen the videos before, probably on Solid Gold or something, but never over and over and over again.

I remember when the Thriller video came out — I think it was even listed in TV Guide — my parents even watched. And they enjoyed it!

Imagining my son being 7 years old now instead of one month, I’m not sure I’d be able to “enjoy” the music or the videos he might be watching right now. Somehow, in the early 1980’s Michael Jackson was able to appeal to 7 year olds AND 37 year olds.

My next big MJ memory came a few months after the big Thriller music video.

I had the jacket from Thriller in 3rd grade — it was awesome.

Yeah, my parents were too cheap to buy me a glittery glove that I also wanted but they totally went all out and hooked me up with a red and black pleather jacket.

Did I mention yet that it was awesome?

I remember it almost having a Michael Jackson like effect at the bus stop.

No, the girls weren’t passing out or anything just being in my presence but they were asking to try it on and I thought that was pretty cool.

While I can’t prove it here with photographic evidence as I’m not sure a photo of me in the jacket even exists — thank god, too, evidence like that would have jeopardized my popularity in high school — trust me, I had it. And it *was* awesome.

I’m sure that if I dug through the attic enough, I’d find it. Or maybe my parents still have it? Mom?

Anyway, I’m not really sure where it ended up but I’d hate to think that we just threw it away…

The next time Michael Jackson came up was when I was just heading into junior high school.

It was the end of the summer and I had a birthday party to go to and I wanted to buy the “Bad” tape for my friend Ryan.

Problem was, the album was being released the day of the party *and* it went over the $10 birthday present limit my mom had set. (Yeah, back then, cassettes were $16.99 for a new release).

My mom ending up buying the tape last minute (going over the $10 limit) and as my friend was opening his other presents, I was a little worried about how he’d react to mine.

See, Michael Jackson wasn’t as cool as he’d been when we were in third grade but when he opened it, everyone at the party was excited. (I did a little fist pump in my head. Yes!)

I remember after the party, when his mom was driving us all home, she had the tape playing in the car (they were loaded so, unlike the rest of us, they had a tape player in the car – remember, this is 1987!) and we were all in the back clapping along to “The Way You Make Me Feel” which was the first song on the album that none of us had ever heard before.

If I remember correctly, that was pretty much the last real birthday party that wasn’t just a sleepover with a few friends that I ever attended. Later that week, we were, afterall, junior high schoolers and far too grown up for “Fudgie the Whale” cakes.

His next album was “Dangerous” with the big prime time network debut of the “Black or White” video and the morphing faces at the end.

I was in high school at this point and while it was okay to admit that you thought the end of his video was cool, it was best to keep being a fan on the hush-hush.

I bought his Dangerous album in Germany on tape because, yeah, I didn’t have a CD player yet and because I was certain that I would probably never again see any of those Germans there to witness me purchasing it.

Yeah, in 1992, there was a little bit of shame in admitting that you liked Michael Jackson *and* Pearl Jam.

I’d say that it was the first MJ album that I didn’t play the crap out of.

It’s not that it wasn’t worthy, but I think my tastes had begun to slide over to less mainstream stuff like They Might be Giants. And, um, Pearl Jam.

Crazy to call a guy like Michael Jackson mainstream, huh? 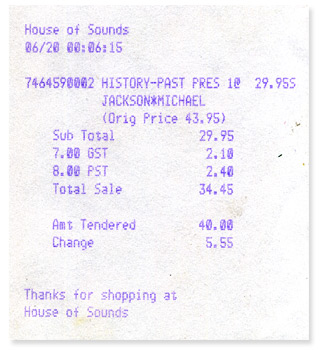 The last time I gave Michael any thought, prior to Thursday, was when HIStory came out in 1995. It was in the summer of 1995 and I was taking a few courses in University.

My friend Alison, almost as a joke I think, suggested that we line up to buy the album at midnight.

Thinking that sounded like more fun than watching Baywatch and Unsolved Mysteries reruns I said that I’d be up for it.

When we got to “House of Sounds” on Princess Street in Kingston, which still sold records at the time, there was already a line up?!

I couldn’t believe it!? At a time when few would admit to even liking Michael Jackson, he could still get people to line up in the middle of the night to buy one of his albums. Amazing.

Anyway, 6 minutes and 15 seconds past midnight, I owned HIStory… and Disc 1 (best compilation EVER!) is the CD player in the car right now…

(Though I must admit, I had to dig through a few boxes this morning to find it.)