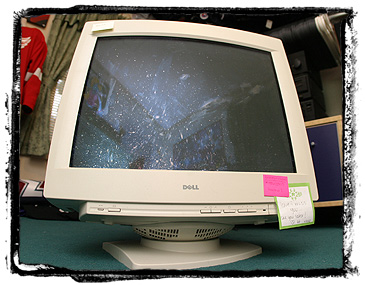 I’ve mentioned a few times that one of the monitors that I’ve been using to type up these posts was one that I bought way back in 1997.

It was a 21″ Dell Triniton which, at the time, was the top of the line. You couldn’t get a monitor bigger than that back then. I paid around $2500 for it.

It was almost a status symbol to have the giant thing overpowering my desk. Of course, at the time, I was living in my parents and I had it set up where I’d had a 13-inch television hooked up to a Nintendo years before.

Anyway, I remember when it arrived — the damn thing weighed around 80 pounds, way heavier than a comparable sized television.

It was one of those awkward sizes too where it was tough just to get out of the box. Too deep to get your arms all the way around or navigate through a doorway, you know?

And then when I hooked it up and turned it on, my excitement quickly turned to disappointment. What the hell were those two slightly darker horizontal lines running across my desktop?

I spent over 10% of my salary for this thing — it should be perfect!

An A/V minded friend pointed out that those lines were how you could tell that it was a Trinitron.

Gotta love it — somehow the folks at Sony convinced the buying public that a terrible flaw was really a feature. Pure genius on their part.

Any how, last night, after 12 years of loyal service, I disconnected it and took it off of my desk and replaced it with a $189 Samsung.

I’ve been using a two-monitor set-up for years now — one 17″ LCD and the big 21″ CRT — and, lately, I’ve found that I’d much prefer to have two identical monitors rather than a mismatched pair.

It’s funny, barely cold and still carrying a mighty static charge, that old monitor already looks like a junky old relic as it sits on the floor.

And to think, just yesterday, it was my beloved workhorse.

American Greed in the Markets?