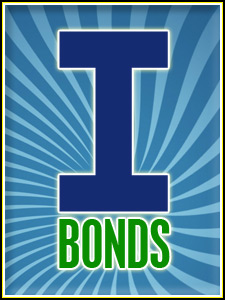 Okay, so I mentioned the other day how I-Bonds purchased right now will earn over 3% for at least the next six months.

Dare I say it?

That sounds pretty good to me.

The last time I said that (back in April when the 6-month rate was over 5%), I threw a cool grand towards TreasuryDirect and, in hindsight, it was a move that I now feel was pretty wise…though opening a Roth IRA or buying some Ford stock at the time would have made me more money.

But for a totally safe no-risk investment — I did the right thing. My only mistake was not maxing out my yearly contribution back then.

The big downside with I-Bonds is that the money is “locked-up” for 12 months and you can only “buy” $5000 worth per year online. You also forfeit 3 months worth of interest if you redeem them with-in the first 5 years.

I’ve little doubt that I’ll cash out well before the 5-year mark but a 3-month interest penalty doesn’t really turn me off enough to turn another direction. A 12-month holding period isn’t unbearable either — especially when it’s not enough to tap out my savings account.

Doesn’t take a rocket scientist to figure this one out…

If even for just six months, the I-Bond is more attractive than stashing money with ING.

If the rate gets better in six months, I’ll let it sit there. If it gets worse, I redeem them next November and take the 3-month interest penalty which certainly won’t amount to much since, in that case, the last three months will be earning substantially less than $11 per month.

I Just Bought a House!