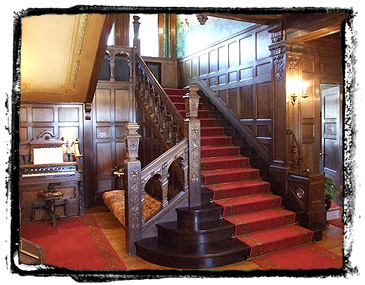 So I noticed today that one of the historic mansions in town is up for sale.

Apparently, it’s been on the market for quite some time but never publically listed — until now.

Now I’m a sucker for old houses — ideally from the 1800’s — preferably architecturally unique and well maintained over the years too.

There are two homes in town that I wish that I could some day live in. One is so large that it has a real honest-to-goodness ball room and will likely be eternally out of my price range.

The other, in some obvious disrepair, would probably be too much of a restoration feat for me even if I could afford to purchase it. Still, it’s an awesome looking home.

Both homes are very similar to those found in Newport, Rhode Island.

The house that I currently live in is, well, from the 1800’s but most of it’s architectural style was decimated over two or three decades of neglect.

The vinyl siding project that I had done a couple of years ago quickly cleaned the place up — on the exterior — but certainly didn’t add to its authenticity.

So, back to this home that I found on the market…

Though it’s not exactly the style of home on the outside that I really get excited about, it *is* right around the corner from the house with the ball room that I *really* want.

One step at a time, right?

Seriously, though, in its own right, it’s an 8,000+ square foot home so it’s certainly nothing to sneeze at. I should also mention that the house has a “name” and a history as it was built by and for one of the very successful businessmen of the industrial revolution — a real nerdy history buff or Jeopardy freak would recognize the name.

Apparently it was even the first home in town to be electrified.

As you’d expect, the inside looks incredible — the type of house that you could easily play basketball inside, not that I like basketball, I’m just saying, you know, there’s something to be said for 16-foot ceilings.

It has one of those double curved staircases with a huge balcony overhead just inside the entry way, a modern kitchen, seven fire places, a carriage house that’s bigger than the house I live in now, and just, well, space galore.

Oh, and three more staircases cause, you know, there can never be too many staircases…

Best of all, since it’s been on the market for so long (apparently), its price tag is comparable to your typical (and characterless) 3000 square foot McMansion.

I can afford that.

I mean, can you imagine how much it would cost to re-paint an 8000 square foot home under historical site requirements? Or just the cost to heat rooms with 16-foot ceilings?

If I had to guess, I’d say that’s exactly why it’s on the market at such a bargain price. The historical restrictions of owning such a home as well as the routine utility costs might be unbearable — I don’t know for certain.

I mean, if re-wiring the place for cable internet isn’t permitted because it would damage the historical integrity of the home, well, that’s a deal breaker for me.

At the same time, I don’t want a McMansion either. To me, they look (and feel) like a couple of double-wide trailers stacked on top of one another — something a tornado *could* conceivably create.

So, for now, I’m going to delay the dream and stay put in my 1800’s de-Victorianized vinyl wrapped home.

Hey, at least I already have some of what I really want.

And now I know that the real deal isn’t as far out of reach as I once thought.

(anyone wanna go halfsies on it with me?)