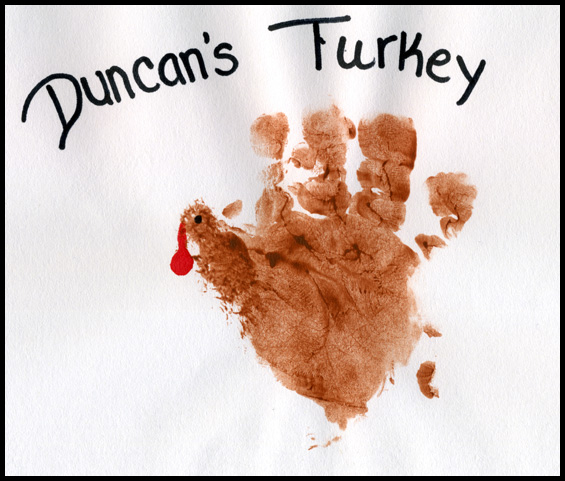 So tonight when I picked up my son, who turns 6 months old tomorrow, from school, as we made our way through the hallway back out to the car, four people stopped to wish him a Happy Thanksgiving.

Granted, three of them *were* employees of the school but, still, it’s apparent that he makes an impression on people. I have no idea who the fourth woman was but apparently she knows my son, again, by name.

That’s pretty cool considering I’m one of those people that thinks most babies look the same.

I once had a math teacher in high school that thought my name was Jeff for the entire school year. Mr. Sopelak was his name.

I’ll always wonder how I managed an A- in his class when, in his mind, Brainy Smurf never once attended one of his classes.

Anyway, I thought of that today as I loaded Duncan into the car because it was Black Friday back in 1992 when my mom and I ran into Mr. Sopelak and his wife outside of a now defunct department store called G. Fox.

The doors weren’t open yet and there were only a handful of people outside waiting for the store to open. Mr. Sopelak recognized me, came over, and had an impromptu parent-teacher conference with my mother to pass the time.

He referred to me as “Jeff” repeatedly. Thankfully my mom, though confused, just went along with it.

See, it wasn’t until that moment that I realized that my math teacher had absolutely no idea what my real name was.

Sure, I should have noticed in class that when he’d call on “Jeff” to answer a question and no one would answer. And then I’d notice him staring at me as I silently stared back wondering why exactly he was looking at me. I guess I just thought he was, I dunno, weird.

Either way, I never did respond well to “Jeff”. In fact, I still don’t.

Over time, though, it almost became an inside joke in the classroom. He’d call on Jeff. I’d, as you’d expect, completely ignore him, the girls in the class would giggle, and then I’d kick in with an answer after like 20 seconds of awkward silence.

In hindsight, it *was* pretty funny.

The guy must’ve thought “Jeff” was a space cadet.

Brainy, however, was worth an A-.

So, basically, I never made an impression and, based on tonight, I doubt that Duncan will have the same problem I did.