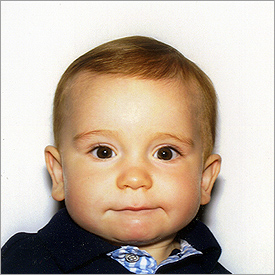 On Saturday morning, we loaded into the car and headed to our local post office to get Duncan his first passport.

In this ludicrous “everyone is a terrorist” society that we live in, even a little guy who can’t even walk needs photo ID just to cross the border into Canada — a country he’s already a citizen of.

Anyway, having called our local post office on Friday to ensure that they were processing applications on Saturday, we were dismayed (outraged, actually) to see sign on the window stating that “We’re not doing passports today.”

Great. Eighteen hours earlier we were told they’d be open. When we show up, they’re not. Nice.

So we high-tailed it to another post office roughly 15 miles away — another BIG post office — in a predominently Puerto Rican neighborhood and thankfully arrived with 15 minutes to spare.

It had a bit of a different crowd than we’re used to and we definitely stood out but, you know what, they were OPEN like they were supposed to be.

The dreadfully-bored woman working in the “Passport” office was wearing sweatpants with writing on the back side. It didn’t seem very, I don’t know, official?

Seriously though, a representative of the US Government can wear sweatpants to work? Really?

Anyway, she was pleasant enough, I suppose, though she had that typical government employee attitude of “I don’t have time for you” even though you could tell she hadn’t really done any real work so far that day. You know what I’m talking about — it was like the DMV but on a federal level.

Either way, she took the picture (I think it looks pretty cool in Jason Bourne sort of way) and took our money so I was content and mailed our application off.

In the end, I had to write a check for $60 to the Department of State, which seems fair, and another $40 check to the US Postal Service for, well, I’m not really sure.

Seems a bit hefty if you ask me…but what can you do?

Now to get him a Canadian passport, you know, since he’s a double agent…

I’ll keep you posted on how that goes…