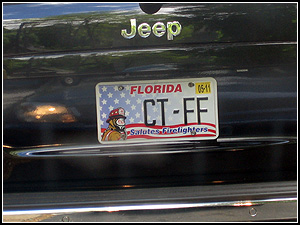 One annoyance that I seem to stew over repeatedly is traffic.

It’s never the number of cars on the road — my commute is quite tame. All two miles worth.

Instead, even with such a short commute, it’s the number of, well, criminals and just plain idiots out there on the road with me.

I’ve gone on and on about how practically every other car in Connecticut has a temporary handicapped placard hanging from their rearview when it’s quite clear that there isn’t anyone with a physical handicap in the car.

Red lights? who cares! Apparently these days you just need to honk your horn as you speed through one and it’s okay.

It drives me bonkers when I see a smoker toss a butt out the window. That’d be like me throwing gum wrappers out the window (which I don’t). The former is apparently okay but the latter is littering? Explain that one to me…

I nearly explode when I see someone empty an entire ashtray at a stop light (if they even bothered to stop.)

School buses? Don’t even get me started.

And I’m not even going to go into my feelings on texting while driving.

Would you believe that I actually saw a guy texting while on a motorcycle a couple of weeks ago? No joke… I should have run him over…

So go back up to the photo at the top of this post.

This guy was in front of me at an ATM last weekend. Everything seems to be pretty normal to the untrained eye but when you look a little closer, this is kind of like when a bank robber puts on a fake moustache to hide their identity…

The dealer logo on his truck indicated that he bought the truck less than one mile from where I live so… isn’t it a but odd that he has a Florida license plate? A special one, even…

Wonder why that is?

Well, I’ll tell you why…

Here in Connecticut, we need to pay personal property taxes on our automobiles.

It sucks — I’ll be the first to tell you.

The very illegal way around this, though, is to register your car in another state. That way Connecticut has no idea that you even own the car (which seems odd in this digital age)…

Florida, apparently, is an easy state to “use” in this situation.

Seriously, I’d say that 10% of cars on the road in Connecticut have Florida plates slapped on them right from day one. Really, I’ve never seen a space shuttle or a manatee in Connecticut but they’re all over the license plates up here.

Further, 90% of the cars with Florida plates have bogus handicapped placards too.

Hey, if you’re going to break the law, why not go all out, right?

So back to this tax cheat, I mean, you’d think that allegedly being a fire fighter, you know, he’d hold himself to a higher standard being a pseudo government official of sorts.

Really, some even consider them heroes. I’m not of that sort but that’s neither here nor there…

Even still, I think we can all agree that heroes should pay their taxes.

What really blows my mind is that the police (also apparently heroes) don’t seem to care.
You’d think that our state government would be upset about all of this lost tax revenue, not to mention illegal tax evasion going on.

It’d be quite easy to stop and then enforce — I mean it’s right out in the open under their noses.

Just using the guy up top as an example:

Um, can you say guilty?