Okay, so we’ve hit a bump in the road on the renovation process.

When compared to all of our other previous home improvements — I kinda knew it was bound to happen sooner or later. Things were coasting along far too nicely…

We had the new floors sanded, stained, and poly-whatevered this week. It looks alright, I think…

The problem is that the flooring dudes were sub-contracted out and compared to the real in-house guys that our contractor has used for everything else so far, well, they don’t stack up.

They have so much to touch up — after they’d already finished a job well done that, well, I feel sorry for them.

Worse, is that I think it sucks that our nice and solid brand new walls with a single coat of paint on them are going to end up looking like, well, repeatedly painted walls less than one month into their lifespan. So much for nice sharp corners. Sorry — that just sucks.

They even got stain on our nice new white lightswitches… I mean, seriously, why are so many contractors like this?

Further, guess where all of that remaining hardwood flooring that I’m guessing will be used for the staircase ended up? Well, they put that out on the front porch. Not sure if you’d heard but there’s this hurricane named Earl approaching and, well, our floor is outside.

Now I know that hardwood is supposed to be strong or whatever and I don’t really think we’re going to see much of a hurricane in my neck of the woods anyway but I’m also pretty certain that the flooring we’ve had installed isn’t “all-weather” flooring.

Is it my responsibility to move it back into the house myself?

If I don’t move it back in, will it make the cost of my project go up?

Personally, though it hasn’t been rained on (yet), I still think the integrity of the unused floor boards has been compromised already. That really sucks.

We emailed the contractor already to let him know the remaining supplies are on the front porch — and he just emailed us back (for real — just now) to let us know to bring it back in. I’m sure he’s thinking “wtf?” right about know… Might even be calling the flooring guys to say it outloud…

I’m also thankful that everyone else left to come back in has been here before — we’ve met all of them and you know what? They’ve done a great job. I’m just angry for them since these bozos just made their jobs a little more difficult…

Anyway, enough of the rant…and on to the floors! 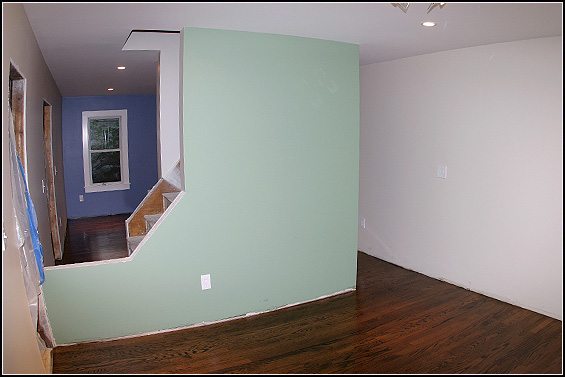 We went with a dark stain, obviously.

I know, I know, some of you are probably thinking, “Dude, it looked better before you stained it — you ruined your brand new floor” and to a certain degree, I know where you’re coming from.

I liked the natural look too.

My wife said it would show dirt more easily.

She’s right and then I started to think that it’d look like a basketball court and, trust me, I hate basketball so we couldn’t have that.

Dark was the way to go. We settled on “Dark Walnut”. I think I’d have preferred an even darker stain — I didn’t expect the grain to pop as much as it did — but this looks pretty good. Again, not what I pictured but pretty darned good.

It doesn’t clash with the colours we’ve selected for the walls (though I suppose we could totally alter the colours now) and it’s not that standard generic blond colour that you see in all of the McMansions still being built during this apparent housing slump.

We’re fortunate enough to be able to totally customize the interior of our house right now so we’re not going to make generic and bland decisions. Thin strip hardwood flooring in a dark colour is definitely not a common sight…

That said, do you think it’s too dark?

Some people think that dark colours make rooms look smaller but I don’t know if I agree… I mean, rooms in a 125+ year old house are pretty small as it is — I’m not sure the floor colour is going to trick anyone into thinking otherwise…