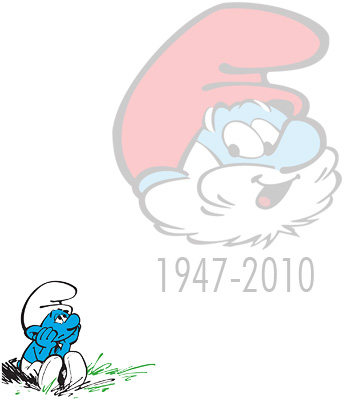 Just over a week ago, now, back on November 28th, I received one of those phone calls that you never really expect — or want.

I was watching some Thomas the Train videos with Duncan when the phone rang — it was my parents’ number.

Not unusual for a Sunday morning but a little out of the ordinary given that I had just spoken with them a couple of nights before on Thanksgiving.

An unfamilar voice speaking over what was an obviously chaotic scene bluntly stated, “There’s been an accident… He’s gone.”

And with that, well, let’s just say that a lot of my perspectives changed.

Papa Smurf had left the village.

My dad died in a fall from a ladder while prepping to do some Christmas decorating. He was only 63.

In a lot of ways, it still doesn’t feel real.

I suppose, in time, it’ll sink in that he’s not (t)here anymore.

I don’t expect that time to come soon for me.

The phone call that morning — and, really, the entire day of sitting squished between two strangers on a series of flights that you never intended on making — was one of those things where you just sit there with a confused look on your face, frozen, unsure of what to do or say.

Paying off all of the new-found credit card balances, well, they’re no longer a priority. Certainly not on the forefront of my thoughts.

In fact, merely hours after learning the news, I’d added a few thousand dollars more on to what I was already carrying and had barely begun to pay down.

It didn’t matter — it doesn’t matter.

So I’ll pick up where I left off on November 27th eventually, you know, put my head down, get through Christmas, and then hope for a “better” 2011.

For the time being, though, I’ve still got that confused look on my face.