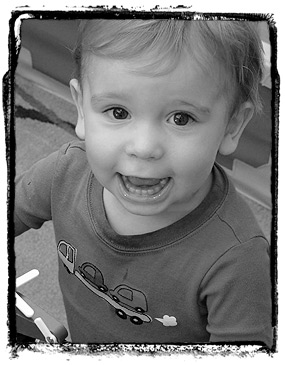 So today, as I took on the role of Mr. Mom (daycare is closed today), Duncan came to me and asked to do another guest post.

His first post was a bit cryptic but, to his credit, he *was* only 5 days old.

Then, a month later, when I was practically in full Mommy-blog mode, he did a guest video post.

At the time it was pretty exciting.

For his third post, though, now nearly 18 months later, having grown tired of being seen here on PIAC but not heard, he wanted to do something different and show off his speaking voice and newly discovered command of the English language.

Okay. I’ll admit he doesn’t speak much English… but he speaks a mean Tiger, dontcha think?

And, sorry if this ruins the whole Brainy Smurf image for you. I sound nothing like him — I’m actually frequently told that my speaking voice (when recorded) resembles Kermit the Frog.

I don’t hear it, personally. 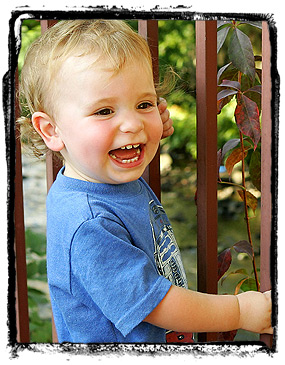 Anyway, the real reason for this post is because I’ve recently found out that a lot of people in my “close” family have been following Duncan’s, well, life through this website.

There are even a few unrelated readers that only seem to enjoy the Duncan photos that I randomly include in my postings — they’ve emailed me saying just that.

So I figured that I’d take it a step further and let you all hear him too (while making great use of the digital audio recorder that Santa brought me).

No worries — I don’t expect to make a habit of this but…Duncan’s time in the spotlight is waning as Smurfling #2 rapidly approaches so enjoy it while it lasts!