CLOSE
Home Life Hollering from the Back Porch! 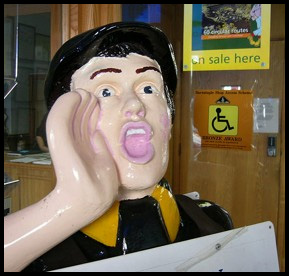 Last week when I posted about needing baby name suggestions for the impending Smurfling number two, of which we received some decent name options that we’ve tossed into the mix (thank you!), Angie mentioned that we should “go outside in the back yard and yell” the name a few times.

I’ve actually heard about that idea — the one of shouting out the name a few times from the back yard — before. A few of the books or baby magazines that we’d read shortly before Duncan was born said the same thing.

We didn’t do it for Duncan and…I don’t think we’ll do it this time either.

Back in the 80’s, as the sun went down, I remember dreadfully awaiting the sound of my Dad‘s voice calling out my name as it was time to come in so I know where the idea comes from.

Thankfully, I was usually one of the last kids to get “the call”.

Either we ate dinner really late or the others kids’ parents were lame. It’s probably the latter. No, it *is* the latter.

Seriously though, with the (unfortunate) direction that American society is rapidly heading (and the main reason I won’t be testing this method), I’m pretty certain that I’ll never have to call out any of my kids’ names from the back porch cause they’ll all be packing cell phones by the time they reach kindergarten.

I’ll just call them on their cell. From my land line (powered by MagicJack and costing me less than $1.75 per month) — since I can bet that I still won’t have jumped on the cell phone bandwagon…

Along those lines, but going back to the mid-1980’s again, there was this one kid in the neighborhood that’d get the shout out not only to come home for dinner or because it was getting dark but for a phone call…

And then off she’d run.

I remember standing there completely puzzled, whenever this would occur, and questioning among my friends “What could be so important on the phone that her mom would call out?”

What was wrong with saying “Sorry, she’s out catching frogs… a quarter of a mile from here…”

I mean, in the second grade, well, I didn’t exactly receive many important phone calls. None of my other neighborhood friends did either.

To this day, I’m still not sure that I receive phone calls that would warrant a shout out from the back porch.

So… who are all these kids I see each and every day — some probably still in kindergarten — talking to all the time?

I guess I’ll find out soon…