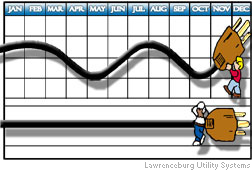 So while paying my utility bills this month, something I do online, I was for the first time nagged to sign up for their Budget Billing plan.

The idea is that your electric bill (or gas or water) will be the same amount every month so you can more easily budget.

Though it sounds like a relatively good idea, I’ve always had a negative connotation towards that sort of thing as if it’s for folks who are incapable of managing their money or for folks on welfare or something. I’m not sure why.

But since both my electric supplier and my natural gas supplier (both actually the same company operating under different names) nagged me, twice even — or four times if you count the nagging on both sites while trying to pay my bills this morning, I decided to click on the little “more info” link for, well, more info.

Taking into account that I was in the process of making payments of $183 and $301, respectively, it seemed like a pretty good sales pitch.

It was probably what triggered the nag screen to come up on both sites, actually.

But is it really a good deal?

I mean, why would they offer that?

What’s in it for them — besides a more reliable and steady revenue stream?

They’ve gotta be pocketing something along the way…

Unsure of where they reach their “budget” number, the “more info” link didn’t say, I have to assume that it has something to do with my usage history so I broke down the numbers by referring back to my most recent annual utility expense chart.

I wasn’t expecting either number to be spot on but the gas bill pretty much was… Let’s ignore that one for now.

Why on earth would they offer to “lower” my bill, upfront, by $11 dollars?

Sounds too good to be true, right?

Well, I’d bet that that’s why they’re offering it… There has to be a catch, right?

New electric rates that will result in lower monthly bills for residential customers of Connecticut Light & Power were approved Wednesday by the Department of Public Utility Control.

Under the new rates, which go into effect Jan. 1, CL&P residential customers will be charged 17.6 cents per kilowatt hour, down from 19.1 cents last year — the rate since 2009.

Well, that explains it…

So I guess “Budget Billing” isn’t a scam and it isn’t a rip-off either.

Still, though, it’s not for me.