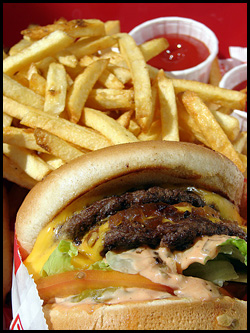 I was never “that” kid that always claimed that pizza was my favorite food. Sure, I like pizza but it’s not anywhere near the top of my list. Not even close.

I was also never that kid the put ketchup — and only ketchup — on everything. I’m sorry, that’s just disgusting.

Like pizza, I’m not opposed to ketchup. In moderation. On french fries. Or hot dogs — as long as it’s accompanied by mustard and relish.

Relating to the fries, I used to base my overall restaurant experience on the quality (or even availabilty) of french fries. It the establishment doesn’t offer fries as a side, well, chances are, I’m not going to like anything on the menu. It’s a good indicator, you know?

Anyway, I have an uncle who reportedly likes anything that comes on a bun. Even if he doesn’t like it, if you put it on a bun, he’ll eat it.

I’d never noticed this in the past and he hasn’t confirmed its validity, to my knowledge, but it got me thinking…

The restaurants that I prefer all serve french fries, yes, but in a more broad sense, they’re really just reatuarants that feature “bunned” food with french fries on the side.

Yep, I’m not longer counting on a side — the main entrée is what it’s all about.

And it’d better come on a bun.

Here’s a listing of my top 10 chain eateries, some regional, in three categories and in order:

Oh, and yes, all of them have mighty fine french fries too!

Now, you’re probably not wondering but since you’re still reading, I’m going to tell you what I order and why I like each one of these establishments.

I discovered my love of A&W back in university on a road trip to-and-from McGill in Montreal.

Since 1994, I’ve only ordered one item on their menu — the Teen Burger Combo. I’ve ordered it probably over 100 times now. On our most recent vacation to western Canada, we ate there at least once every single day. Duncan even dipped his first french fry in ketchup, all by himself, just north of Calgary.

To those stateside, I know what you’re thinking, “Yeah, yeah, the root beer place — seen it a few places, might have even eaten there once, but it didn’t leave an impression.”

A&W is a shopping mall food court staple in Canada. The stand alone restaurants now dot the country as well — I’d say it’s about as common as a Wendy’s is in the United States.

Anyway, the Teen Burger is essenitally nothing more that a bacon cheeseburger — except it’s freakin’ awesome. They’re seldom skimpy with the fries, they have vinegar to put on them, and who could pass up a heavy glass mug covered with frost?

I don’t even like root beer but I’ll make an exception at A&W. (They serve Coca-Cola too.)

One of the best burgers around — at it’s fast food, eh? Crazy…

It was probably back in 2006 or so that a new restaurant called “Famous Dave’s” opened up not far from where we live. It was connected to a hotel and plainly visable from the highway so, well, it seemed like a long shot but one weekend we headed there for lunch.

Turns out that it was a barbeque place. Always a plus, that. Anyway, on that first visit, I ordered the Georgia Chopped Pork Sandwich.

Holy crap — I’m usually more a fan of beef brisket sandwiches but this this was amazing.

Since then, that location has closed (it was never a good location anyway) so we have to trek up to Massachusetts every now and then to get our fill — and carefully plan our road trips around their other locations. The midwest is full of them. I always order the exact same thing.

It’s a sit down type of place with ribs and such but you can’t go wrong with this sandwich. Their fries are big crinkle steak fries, they have an assortment of barbeque sauces to try out (Devil’s Spit is the best), and the sodas are bottomless.

We actually just discovered this chain a few weeks ago and…we’ve eaten there every weekend since.

My meal of choice is their signature Jake Burger with everything on it. Everything consists of ketchup, mustard, pickle, raw onions, lettuce, and tomato.

Again, there isn’t anything overly fancy about the food or even the menu — it just tastes great. And it looks real. Like if I had the equipment they have at my house, well, this is what I’d want my burger to look like. You know what I mean?

A better way of putting it, I suppose, is to say that, unlike McDonald’s or Burger King, their food actually looks like the picture. And it taste’s even better.

Still, though, it’s another Pepsi restaurant. I hope they get a great deal on it though cause, let’s be honest, Pepsi tastes like crap.

Oh how I miss Roy Rogers.

There used to be one in town — long before I lived here — but it’s been a revolving door of restaurants for years since.

Roy Rogers is a roast beef and chicken fast food joint that’s on the decline. Over the past decade or so, they’ve all but withdrawn from New England and I can’t imagine why — they were always busy and their food was consistently perfect.

Not an easy task.

At Roy’s, I’d always order the regular Roast Beef Sandwich. Nothing fancy but *so* much better than anything rival Arby’s could offer.

See, Arby’s meat has that slimy mystery meat feel to it — it’s like brown ham or something. I challenge anyone to deny that.

And what’s with the bubbles in their meat? It’s like overcooked carbonated ham from a cow dipped in fake butter. Gross!!!

Roy Rogers’ meat actually has the consistancy of, well, roast beef that you’d get at the deli. Further, their barbeque sauce is the perfect compliment to roast beef. Seriously, I’d drink the stuff.

Sadly, I fear their days are numbered. Many have been replaced by Arby’s (ugh!)and those that are still in business, well, it just seems like a chain slowly riding off into the sunset.

They still have a firm grip on the rest stops on the New York State Thruway but, well, foot court style eateries are never as good as the stand alone buildings. Still… I’m thankful they still exist.

This is another Canadian chain. There are a few that dot the border on the US side but they’re few and far between.

Swiss Chalet is a chicken ‘n ribs themed sit down restaurant. Not all phony like a Chili’s or Outback but still a full sit down type of place.

Not being a fan of ribs, I’ve always ordered the “Chicken Carver Sandwich” where you get your choice or white or dark meat. I never offer a preference so I’m assuming that I’m always given the dark meat.

Totally fine by me — when it’s in the bun, I can’t tell the difference anyway. The fries at Swiss Chalet leave something to be desired — they’re not fast food style fries — but they have this gravy/dressing that’s unlike anywhere else. I used to hate it but now I dip my sandwich in it before every single bite.

At the conclusion of the meal — probably more for the rib eaters — they bring out a finger bowl with a lemon slice in it. Neat touch. Useless but memorable.

Frankies and the related Big Frank’s Big BBQ are a regional chain with locations in Connecticut and, apparently, Florida too. It’s a quick service hot dog serving greasy spoon type of place.

At Frankies I order something called a “Mondo Burger”. As you can imagine, it’s a super greasy double (or triple) patty covered in cheese with all of the toppings you can imagine. You know, the type of burger where, following the first bite, your palms are soaked in hot grease with some extra running down your forearms.

At their slightly more upscale BBQ themed place, Big Frank’s, I order the Beef Brisket Sandwich. It’s hardly beef brisket, more of a thick well done Steam ‘Um type of meat, but it’s served on an amazing fresh bun. I’d love to know where they get their buns — they’re like elongated Portugeuse rolls.

Their in-house BBQ sauces complete the meal. It’s not true beef brisket, no, but it tastes great!

Twenty-four hour dining at its finest. Having grown tired of Denny’s dated and, well, overly-breakfast themed menu, someone had to start serving better food at all hours and Steak ‘n Shake delivers!

I first ate at a Steak ‘n Shake in the wee hours of the morning somewhere in Ohio while making an overnight drive from Hartford, Connecticut to Lafayette, Indiana. Let’s just say that I was thrilled to be able to order a burger and a Coke at an ungodly hour…

Since that night, err, morning, I’ve always ordered one of their SteakBurgers. I’m not certain why they call it that — it ain’t steak, that’s for certain.

They have these tiny french fries too that you’d expect to be kinda limp and mooshy but they never seem to be. No clue how they manage.

Eitherway, it’s good food at an amazing price especially when considering that it’s still a sit down type of restaurant. Oddly enough, though, I’ve never had a milkshake there…

The first time I ate at a Checkers was back in 1997. I was on vacation in Florida and it was pretty late, we were sick of McDonald’s and Burger King, this place was open. I ordered two CheckerBurgers.

Well, let’s just say that I haven’t been to a McDonald’s or Burger King in the State of Florida since 1997.

Plain and simple, this is fast food. Most locations are nothing more than a drive through with a few concrete tables outside but, for whatever reason, their burgers are a cut above any of their competitors. You know, like Wendy’s, McD’s, BK…

They’re super cheap too. Oh, and I should also mention that unlike some of the other fast food places, their stuff doesn’t go right through you.

You know what I’m talking about…

Yep, a Big Mac attack generally leads to a Crap Attack… Not so with Checkers.

Okay, I know you’re thinking, “Wow — how can seafood make this list?”

My menu item of choice at Red Lobster doesn’t come on a bun — I *always* order a double portion of Alaskan Snow Crab legs — with fries as my side.

I’ve always managed to clean my plate and though a lot of seafood snobs rate Red Lobster about as high as Long John Silvers, well, they’re wrong and should give Red Lobster another try.

It’s just as good — and I’ve found better — than the more expensive (an imaginarily exclusive) seafood restaurants out there.

Yeah, the service usually sucks and the atmosphere is pretty McDonald’s like but there just something different about a fast food place with crinkle cut fries.

And thankfully they’re a Coca-Cola establishment!

Photo of the Week: Ready and Waiting…