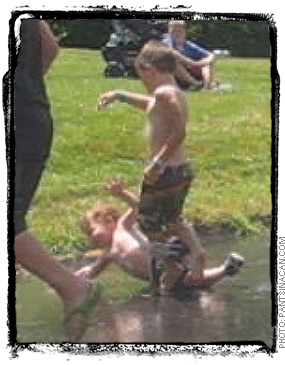 This afternoon we headed over to a local “Extravaganza”.

Seriously, that’s what it was called.

It was one of those municipal events where they sell fried dough, cotton candy, and over priced inflatible somethings to benefit the Parks and Recreation department or something.

This one had a full blown carnival with a dozen or so rides and even some miniature horses for the kids to ride.

But the one thing that caught Duncan’s eye was the fire department’s ladder truck — ladder fully extended and spouting water from the top.

He wasn’t dressed for running through the water but we took his shirt off and set him free anyway.

As we did so, I surveyed the scene and pinpointed one kid.

He was a little too old to be frolicking in the mist and, well, he obviously had no regard for anyone around him. You know the type…basically, he was a threat.

It was one of those things where I “knew” it was going to happen — I even said as much outloud — but I wasn’t about prevent my kid from having a good time because of one moron in the crowd.

I’m not the over protective type.

But it’s not like you can take a preventative stance these days either and go up to someone else’s kid and say, “Hey, quit being an idiot and watch where you’re going…” without having their even bigger idiot parent getting all up in your face about it…

So, instead, my kid got bowled over.

Go ahead, it’s okay to watch it a few times. Frame-by-frame, even…

That’s the beginning of my reaction at the tail end of the video.

Had I kept the camera rolling, you’d have heard my expletive laden description of how I really felt about what I’d just witnessed.

No worries — I didn’t say it loud or anything but the camera microphone most definitely would have picked it up.

Of the nine or ten adjectives and one noun that I uttered, well, “little” was the *only* word that could be considered safe for this website…

To the kid’s credit, he wasn’t without remorse.

Immediately after it happened, he stopped in his tracks and just stood there looking at Duncan (who was laying in a puddle on the pavement with his hands over his face and feet in the air) as my wife ran into the fray to make sure he was okay.

As my wife picked him up, I could plainly see that the kid felt bad. He had that sort of posture that kids get when they want to say “Sorry” but don’t know how or when exactly to do it. I mean, it’s not like he did it on purpose…

I also watched him look over his shoulder to see if his parents were calling him over — which they weren’t because, well, I’m sure you guessed it, they weren’t the type that supervise their kids.

Anyway, once the kid realized that he’d “dodged” a bullet, well, back he went to running around with total disregard.

Seriously, he’s way too old to be afraid to open his eyes when running through a glorified sprinkler. Is it just me?

I dunno, a helmet and shoulder pads shouldn’t be required for running through the hose…

Not being the overprotective type, once Duncan’d composed himself, we sent him right back out there.

As you can see, Duncan’s okay.

And in a weird sort of way, I’m pretty proud that he could take a hit like that.

I’d still be laying on the ground.