About a month ago on my way to work I noticed a billboard that seemed, well, out of place. 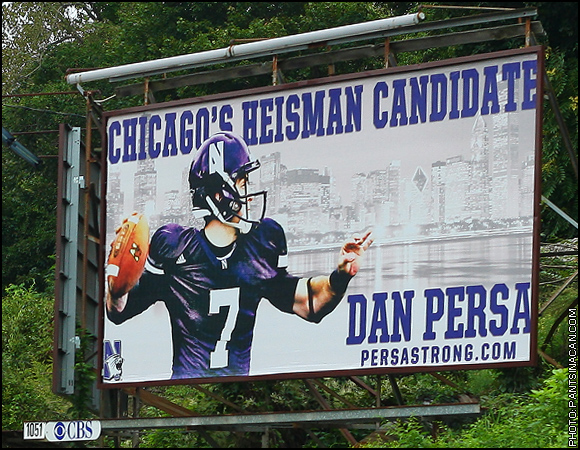 In the past, it’s been Pepsi, McDonalds, or some obnoxious local attorney advertisement.

But this…”Chicago’s Heisman Candidate” seemed a little out of place in central Connecticut. 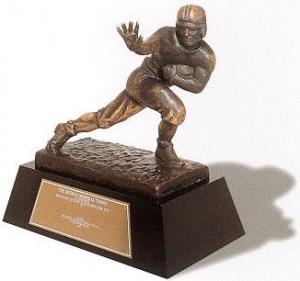 And I’ve never heard of Dan Persa. If he were a local kid in the running for the Heisman trophy, you’d think there’d be some media coverage.

I mean, Connecticut isn’t exactly a football hotbed so a local kid in the running would be BIG news.

Then I began to think that maybe Northwestern University transposed a number when ordering the sign from CBS Outdoors.

And then I referred to the trusty internet to find some answers.

Dan Persa is not from Connecticut.

He’s a 22-year old quarterback from Bethlehem, Pennsylvania that plays for the Northwestern Wildcats.

It’s exactly where they wanted it… Seriously.

From the Chicago Tribune:

Make that the heart of college football opinion country. Bristol is home to ESPN, and NU officials have bought billboard space there on a key artery. Chicago commuters can see the ad next week on a Kennedy Expressway billboard at Kimball Avenue.

NU officials chose the theme “Persa Strong” after ESPN.com’s Bruce Feldman named Persa the 10th-strongest player — and strongest quarterback — in the nation. The 210-pound Persa can bench-press 360 pounds and squat 520.

Persa has not seen the billboards but said, “Anything that can get more attention for our team around the country is cool.”

Well, I hate to tell them but…the sign isn’t on a route that many ESPN commuters will ever see.

It’s actually angled in a way where you can only see it while driving away from ESPN.

Making matters worse — it’s on a road through an industrial zone. A, how shall I put this… depressing and out-dated industrial zone. Yeah, it follows a seldom used freight rail line… you know the type of road…

Not a deadend by any means but certainly not a main artery for the influential on-air ESPN employees that they’re trying to sway.

Point being — I highly doubt Chris Fowler, Kirk Herbstreit, or Bruce Feldman have seen this sign or ever will even though they’re often just a couple of miles away.

The security guard for the lot they park in, well, he’s probably seen it.

But I suppose it got some publicity here on PIAC so it’s not all for nothing.

I don’t think that’s exactly what they were aiming for though.