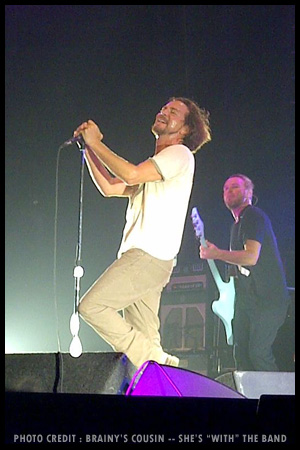 Sure, I could look this up but my first thought was to ask frequent contributor DD (the inspiration for my spending reports)…

So, when I started the car tonight on the way home from work, Even Flow by Pearl Jam was just starting on the radio.

I nodded my head and uttered, “Good tune” even though I was alone in the car.
Yeah, that’s how I roll.

Even Flow came out on, like, the same day that I started grade 10. Everyone was all into the first single, Alive, because it had a music video but the song before it (Even Flow) on the cassette (yeah, I bought it on tape) was, in my opinion, far better.

And I’m not ashamed to admit that I don’t think I’d even heard the most popular tune to come off of that album (or ever from the band), Jeremy, until it was released as a single like 6 months later.

You know, back then, it took effort and time to fast forward. Jeremy was the last song on side A — not a great spot. Basically, I’d play Sega in my room while listening to the first four songs, hit rewind, and play again. If you’re under 30, this paragraph probably doesn’t make any sense.

Anyway, I like to think I’ve got a pretty good ear when it comes to music.
I hear everything. Even without headphones, I pick up on the small stuff like taps on an open hi-hat on the upbeat of every third bar — you know, stuff that you wouldn’t normally tap your foot to.

So, tonight, as I’m rocking out to a Pearl Jam song that I “think” I know pretty well, I notice something different.

More guitar, like tons more layering, and even the solos faded gently in and out instead of being layed on top like some ridiculous Eddie Van Halen “I think I’m so awesome, let me play 200 notes in 4 seconds with some help from a synthesizer” post-production afterthought.

There were even extra Eddie grunts — so much so that I began to question my version of the lyrics and, um, grunt noises and I really began to listen more carefully.

Not a live cut or some crappy bootleg with audible heavy breathing — still a studio recording but…less polished.

Simply put — it was better than what I have at home here on iTunes. I did a test listen, with headphones. The “original” almost sounds cheesy in comparison.

So, DD, is what I heard today the version that you paid like $1000 for a couple of years ago?

If so…I take back what I may have said then.

It was probably worth it.