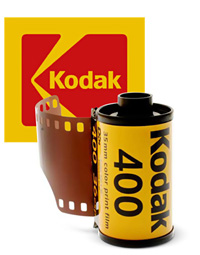 As a professional photographer, it’s sad to see Kodak’s coffin apparently on the verge of being nailed shut permanently.

They filed for bankruptcy protection today and if memory serves me correctly, this has been a bit of a recurring occasion for them over the past few years.

I think at one point they even demolished a number of their buildings on their historic campus in Rochester, New York simply to save some money on property taxes. You know you’re in rough financial shape when the situation is so dire that things like that begin to appear as solutions.

Though I rarely used Kodak film during my days of shooting with a film camera (in favor of, im my opinion, the far-superior FujiFilm) and haven’t even considered purchasing a roll of film since my switch to digital over a decade ago, I still use the phrase “Kodak moment” from time to time.

It’s going to become outdated quick — if it hasn’t already — like saying something like “Tommy Gun” or “Chicago Typewriter”.

My uncle says stuff like that and had I not sat and watched Geraldo’s anticlimactic primetime opening of Al Capone’s vault, well, I’m not sure I’d even know what a tommy gun is.

Obviously it’s a gun, duh, but for those that are completely lost, a tommy gun was the drive-by shooting weapon of choice from 1920 through, hmmmm, probably the mid-1940’s. Simply put, it’s an old school machine gun.

Anyway, back to the present, at less than 50 cents per share now, I almost want a piece of Kodak just to say I had it. Maybe even frame it and put it on the wall.

Do they even issue paper stock certificates anymore?

Paying off a Loan