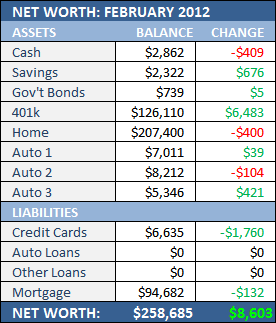 January was a pretty good month for me.

While most of the gain was due to my 401k and 100% based on a swell in the stock market and not anything that I actually did, I’m still pretty proud of the progress I made on the credit card debt.

Cash:
My side income was a bit higher than normal — especially at the end of the month — which definately shows in the category.

Savings:
After taking a few thousand out in December to pay my property taxes, I’m back on the $135 per week deposit plan.

Gov’t Bonds:
The variable rate portion of these is starting to become noticable. Just five bucks? Sheesh… Hey, at least they’re still earning more than the same amount of cash would in a savings account.

401k:
I’m not totally certain but I think my balance here is approaching the highest level that it’s ever been. What recession?

Home:
This drop must be due the cracked piece of sidewalk out front. ;0)

Auto 1, Auto 2, and Auto 3:
The Scion took it on the chin because some jerk-wad dinged the passenger side door. That said, the car is over 6 years old now so it had a pretty good run…

Credit Cards:
Oh yeah… Down $3260 over the last two months. My financial goal for 2012 is quickly coming together.

A Few Home Improvements on the Horizon…