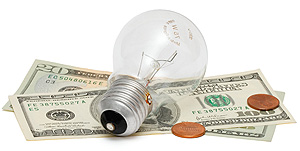 I’m pretty sure that I’ve said this before and, if not, I’ve certainly thought it — I can’t stand it when people just generally assume that “things are going up”.

In the past, I’ve found that a nice constant to use for this sort of analysis is a utility bill — any utility bill.

I moved into my current home late in October of 2002 but, for simplicity sake, I’ll just pretend that I moved in on January 1, 2003.

As you can see, I peaked in 2008 and have been on a steady decline ever since.

Gas prices do flucuate, yes, but my heating habits certainly haven’t. I like to wear shorts in the house — even in February.

Thanks to global warming (or something), it was a balmy 58 degrees in Connecticut on Wednesday.

So I’ll blame that “inconvenient truth” — and applaud it. Hey, it’s saving me money!

Seriously, though, last time I heard, gas prices have been on the rise since 2008… and are still going higher… yet, my bill is shrinking…

The weather hasn’t been “that” crazy…

Ordinarily I’d just flat out say something like, “Things aren’t really going up now, are they?” and end the post there…

Could it be that the new siding and that insanely small amount of styrofoam insulation behind it that we had installed in the summer of 2007 got the ball rolling?

And what about the “real” insulation that we put in behind the walls during our 2010 interior renovation?

Could those “investments” be paying for themselves via my natural gas bill?

Okay, so my gas bill has dropped, what about the others?

Well, here are the stats for the rest of my utilities (exlcuding water/sewer cause it’s pretty static no matter what): 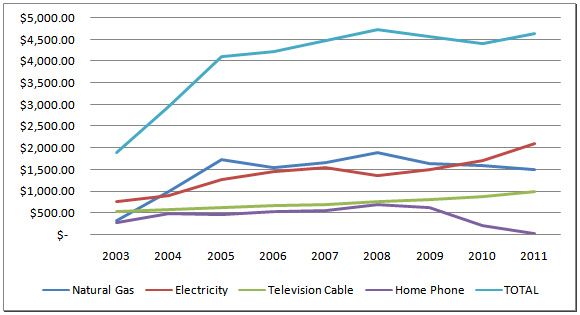 Electricity and Cable went up, phone dropped like rock.

Well, I’m going to attribute the recent electricity increase to laundry for a family of four (starting in 2011) and a power sucking plasma television (which debuted late in November of 2010).

And the cable bill relates directly to the new television — we upgraded to HD service.

The dates coincide with the additional expenses.

I can’t stress how great this thing is.