This is a repost from April 26, 2007. Yeah, almost 5 years ago… Seems history is repeating… Already. 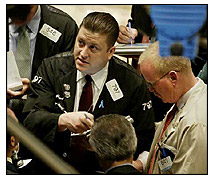 Summer Vacation: Coming in Under Budget