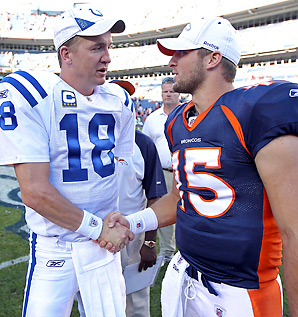 True, it’s not the right time of year to use a football reference but, of late, most of the news I’ve heard is about Tim Tebow and Peyton Manning — two football players.

So, with that, I’d like to announce that I’ve officially entered the red zone where I step up my debt repayment pace tenfold.

Simply put, I’ll be debt free (besides the mortgage) again in a matter of weeks.

I’m so thankful that I never get down on myself regarding my finances for very long even when things are clearly bleak.

Can you say $30k in high interest debt?

Ouch. That might be worthy of a stronger adjective than “bleak”.

Anyway, and I realize this is a couple thousand dollars premature, having endured it all over the past year and a half or so, I’m pretty comfortable in proclaiming that I’ve mastered yo-yo debt levels while keeping a level head.

Is there a merit badge for that?

I’m not saying that that’s a good thing but, really, having done it now twice in a relatively short time period (all within the time period that this blog covers), I’m super confident that I can pretty much dig myself out of anything.

Hopefully this time, though, I won’t dig myself so deep!

Updated Photos of the Renovation…