April 4th was the Thursday prior to Easter and that night Scout Pack 274, Den 7, had an after school Den Meeting.

The weather was unusally nice so the Den Mother that week, Brian Kurtz’s mom, took us all to a local recreation park that had a big, well, not really an obstacle course, but a paved trail with “exercise” activities along the way.

Anyway, I was way ahead of the pack. I mean, lets get real, even as early third grade, the typical boy scout isn’t exactly a prime specimen — a bunch of rejects and dorks, myself included — so there really wasn’t too much competition.

I remember running from station to station almost effortlessly — there were maybe ten of them over a mile long course or so — until I got to the last one.

Something hurt. It wasn’t an ankle or a knee or anything. It was more like a cramp. A really low cramp.

I sat, kinda hunched over, on a bench waiting for the other kids to finish…and even longer waiting for Brian’s Mom to finish and then toughed it out for the car ride home.

Once home, I refused dinner which really wasn’t that unusual.

I mean, I always ate, but when it was something gross (like anything plated with mushrooms, brussel sprouts, squash, beets, or yams), the food that entered my mouth was minimal. It was probably one of those nights — I don’t think my parents thought much of it.

The next day was Good Friday so there wasn’t school that day. My dad would have gone to work and my mom would have stayed home with me and my sister.

I don’t really remember much of the day — it was probably one of those days where I stayed in pajamas all day and just watched tv. I do know that my mom was aware that I wasn’t feeling well at this point but, again, this wasn’t terribly unusual, I was sick all the time.

When my Dad came home from work and we sat down to dinner, I didn’t eat a thing. Nothing. Again.

I remember my parents getting a little heated when I continued to refuse food thinking I was just being an overly picky eater.

After dinner I remember them trying to get me to swallow some pills — tylenol or some sort of cold medication or something — and I couldn’t do it.

They didn’t understand and I remember crying as my dad was borderline trying to force the pills down my throat but they just wouldn’t go down.

Of course, at this point, their tasty coating was long gone making them borderline impossible to swallow anyway so I was sitting in the bathroom downstairs with a glass of ginger ale trying to explain to my parents that “I was full”…

They didn’t get it.

Saturday came around and I didn’t leave my bed. I’m pretty sure it was assumed that I had the flu or something.

Then Easter morning came. Easter in our house wasn’t quite as exciting as Christmas, but my sister and I usually woke up at the crack of dawn to pick up jelly beans (before the our dog Spike licked them all) and scope out our Easter baskets.

I do rememeber getting out of bed. I remember harvesting some jelly beans. And I also remember opening a new engine for my N-gage train set — it was yellow.

And I’m pretty sure my parents really started to worry about was wrong with me when I showed zero interest in playing with the new train or even eating candy for breakfast.

Now, keep in mind that this was before the days where people would go to the emergency room with a stuffy nose, so my parents attempted to make a doctor’s appointment on Easter Sunday.

My normal pediatrician had the day off, obviously, and was probably even vacationing on some tropical island but his office (or answering service or someone?) recommended the old school pediatrician in town — Dr. Lothar Candels.

We’d never heard of him but, apparently, for those who’d lived in town since the roads were just dirt paths, this was the family doctor. Yeah, the type that’d make housecalls or be the subject of a Norman Rockwell painting.

So, Dr. Candels agreed to see a non-patient on Easter morning. I’m pretty sure that’s an impossible scenario in 2012.

Anyway, I remember his office being more like barber shop where you’d expect to talk about hunting or fly fishing than a doctor’s office

This place smelled funny and old, the floor creaked, and the walls had were covered with dark wood paneling. The waiting room was, well, just an entry way (not that we had to wait — he was the only one there and totally expecting us). 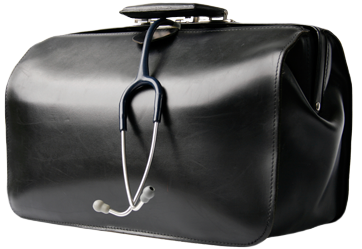 He sounded (and looked) a little like Henry Kissinger. He even pulled stuff out of one of those old black leather doctor bags when he was pressing on my stomach and listening to my lungs.

He wanted me to pee in a cup but not having injested much of anything for 3+ days, well, there wasn’t much to provide there…

In the end, he directed my parents to the hospital and I didn’t return home for two weeks.

Still have the scar to prove it.

Which brings me back to the present…

In the wee hours of the morning on March 31st, Henrik, who’d been sent home early from school the day prior, was having a tough time breathing.

I’m still not the type to ever go to the hospital unless I’m missing an appendage but since I’m pretty accustomed to breathing problems (they suck) and Henrik can’t talk yet to explain what he’s feeling we decided not to ride this one out.

My wife took him to our local hospital while I stayed behind and watched Duncan.

Our local hospital admitted that they weren’t exactly set-up for 1 year olds (it was Henrik’s first birthday) so they set-up a middle of the night ambulance ride to the Children’s Hospital in Hartford.

Now, I don’t know about you, but getting to ride in an ambulance on your birthday would be pretty cool.

I’ve never had the opportunity to ride in an ambluance…

Anyway, a stuffed WebKinz horse, a neat-o birthday card, and 5 hours later, they were outta there.

Diagnosis was/is asthma with a hint of pneumonia — it’s all good and made for an exciting birthday. 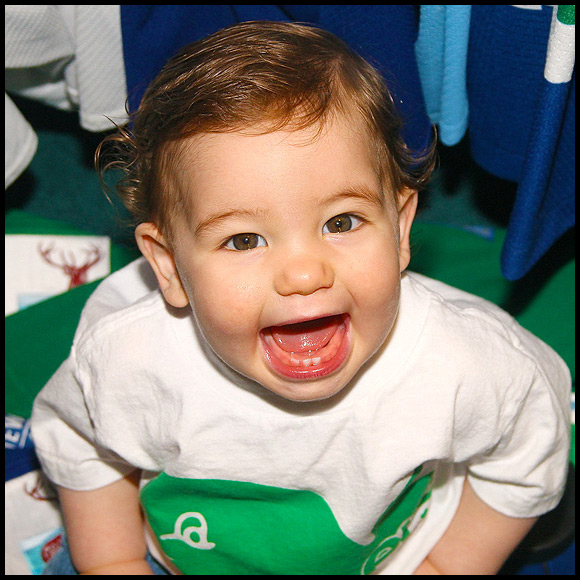 Anyway, while I’m sure my family will continue to be the type that only goes to the doctor un-expectedly when the situation is dire, I’m pretty sure I’ll always think twice before thinking my kids are “faking” it.

They’re still too young now to comprehend the “benefit” of staying home sick so there isn’t any incentive to pretend just yet (though Duncan does ask for a bandaid a little too often) but I’m pretty certain I’ll lean more towards their claims when it undoubtedly occurs.

What’s in a Wardrobe?