As I prepare to start my Month of May purge, I couldn’t help but get a little sentimental over some of the boxes that have been holding my “stuff” for the past two decades or so. 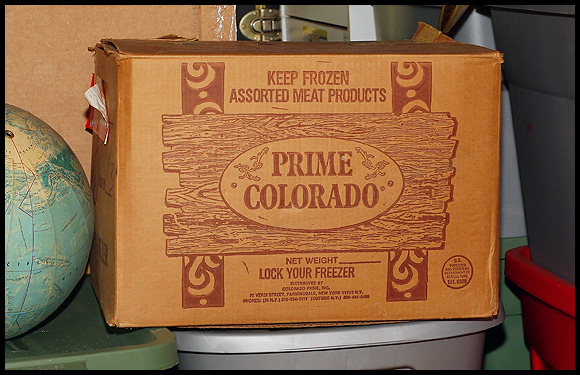 Colorado Prime was (and amazingly still is) a food wholesaler that sold direct to consumers.

So, at some point in the 1980’s my parents were apparently conned (I need to ask about this) into purchasing a huge upright freezer (through Colorado Prime at a significant mark-up, I’m sure) and signing up for some sort of “food delivery” plan.

I’m not sure if it was like a cell phone contract, where they were stuck for a certain number of years, but we amassed an awful lot of these cardboard boxes over the years.

Basically, every month or so a big unmarked semi would back into our driveway and drop off a *TON* of food in these boxes.

If the print on the box was brown, it was “assorted meat products”.

If the print on the box was green, it was full of non-perishable groceries (and usually heavier than sin.)

So, in our basement we had enough canned goods to survive for years following any sort of nuclear attack from the Soviets (though we were never the paranoid type to worry about such a thing) and while we were blindly awaiting that attack, we ate red meat pretty much every single night.

So much so that I still detest red meat (except in hamburger form… and hot dog form too.)

Anyway, the pack rat hoarder in me really wants to hold on to one of these boxes for, well, nostalgia’s sake but my brain is telling me a picture is enough to remember it by.

My brain is winning.