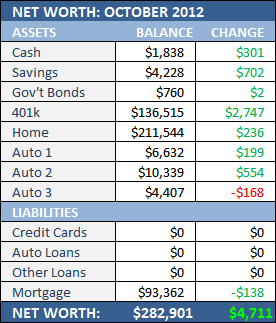 Yeah, yeah… It’s been a month since my last post…

Every time I fall way behind like this, I tend to lose focus. I still keep track of my finances but I don’t really analyze them.

So this info feels like ancient history at this point but for the sake of having a monthy net worth update, here goes:

Savings:
This was weak. I’ve been stashing away around $1300 each month but came up short right at the tail end of September and had to “borrow” $600 from myself. I say “borrow” but I just spent it. Just keepin’ it real, folks.

Home:
I’m not selling so this number doesn’t really hold a lot of weight for me.

Auto 1, Auto 2, and Auto 3:
It’s hilarious to me that the oldest car I own is “apparently” worth the most. It’s also hilarious that it all adds up like that considering it’s the one that was in a big accident.

Credit Cards:
Sometimes I can’t believe that I used to routinely carry $25k+ balances here… For real — check the archives!

Mortgage:
Back to the minimum payment again…

Will the A/C Make the Electric Bill Unbearable?