So, tonight my family had a ‘toe’-ing away party for my infant son Emmet as, tomorrow, he’ll be having that, ahem, extra toe removed from his left foot.

The procedure has been planned for a few months now and the plan tomorrow is just to have the “extra” toe removed but not separate the two toes on each foot that are webbed together.

The extra pinky toe has to come off if he ever wants to wear shoes but the webbing issue is only cosmetic. Apparently there are tons of people with webbed feet walking among us. Who knew?

Anyway, both would be covered by health insurance but we’re not vain enough to put him through any unnecessary pain simply for the sake of what will likely just end up being ugly feet anyway…

Tonight, to celebrate his extra digit and give him support, we played tic-tac-toe, pin the bandaid on the toe, and painted our toe nails — it was a lot of fun as you can see in the picture below. 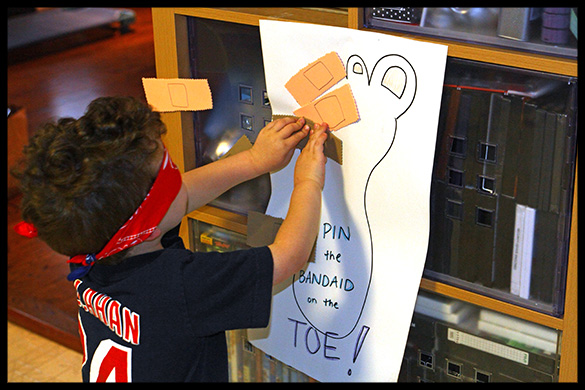 As for tomorrow, well, I’m a little apprehensive about it, honestly — it’s sure to hurt like hell – but also kind of excited for him too.

I mean, not that he’ll remember any of this but it’ll be nice for him to have semi-normal looking feet for his first summer. It is getting to be flip-flop season, afterall…

In related news, the test results for the syndrome that had me concerned that he could potentially turn out to be an evil swashbuckling tiny headed sloth creature that swims like Michael Phelps and loves Rocky Road ice cream turned out to be nothing to worry about at all.

Results were negative for Smith-Lemli-Opitz Syndrome (SLOS) so instead of being potentially “sick” (or evil, or swashbuckling, or tiny-headed) for the rest of his life, he’ll just be “that” guy with the cosmetically altered (meaning beautiful) feet that tells the story all too often about how he used to have eleven toes.

Or was it nine toes?

Either way, he’ll always be a little mutant to me.

And I’ve got the pictures to prove it! 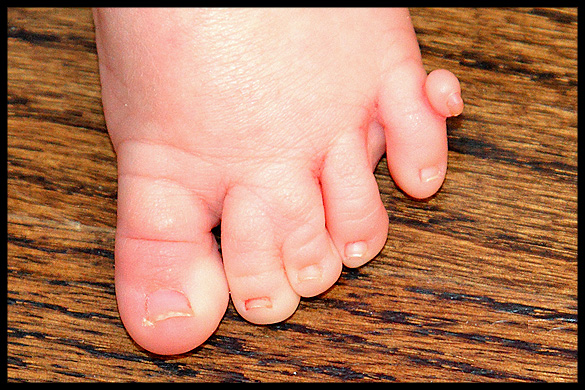 Success on the Insurance front? I’m Not Sure Yet