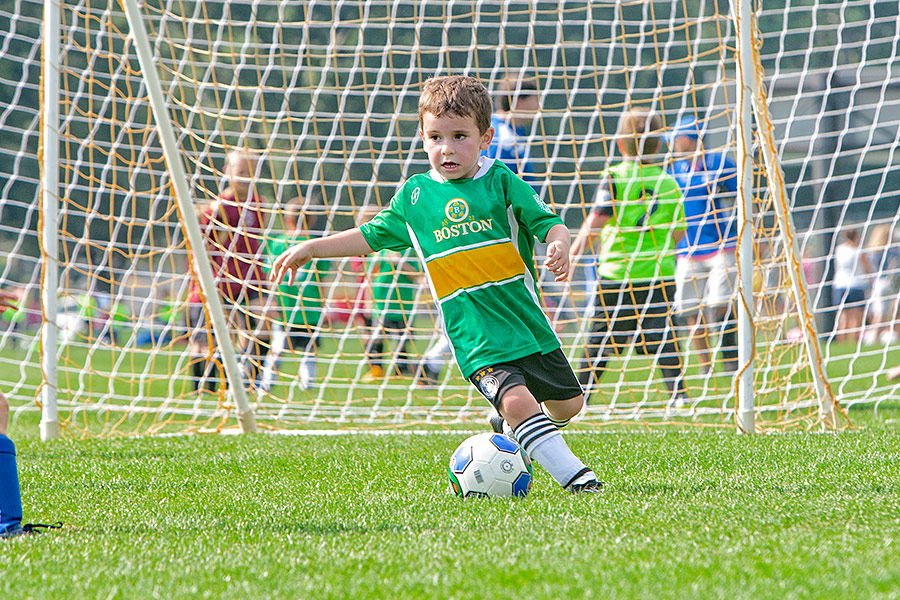 Last weekend my oldest son Duncan’s soccer team suffered yet another defeat losing by a score of 16-2.

While soccer for 5-year olds is supposed to be more about having fun than winning, kids aren’t stupid. They know they’re getting killed out there.

They haven’t won a game yet this season and, not to toot my own horn, but Duncan has scored every single goal his team has gotten credit for this season.

Well, except one where the other team scored on themselves. These are 5-year olds we’re talking about here…

So, down by double digits already before halftime, after a player on the opposing team had just scored yet another goal, there was a little showboating going on.

You know, an in-your-face excessive celebration, the kind that would totally result in a flag being thrown in American football.

So, from the sidelines, I saw my frustrated son say something to the player.

My son responded back.

The kids’ parents joked, “Look at the trash talkin’…”

Then they saw their kid’s red face and the dad proudly proclaimed, “Oh, he’s pissed… Look at ’em!”, you know, excited that his son cared so much.

Not far away, I was trying not to smile, also proud that my son stood up for himself and his team — and thrilled that whatever it was that he’d said had clearly infuriated the opposition.

(For the record, the two were on the same team last season — no “real” strife here. Just a couple of ahead-of-the-curve kindergartners who already have the competitive flame going…)

Now, Duncan can’t hide his emotions very well. He was *very* upset both by the score and the subsequent teasing.

As they lined up to restart the game, I saw his coach lean in and say something, Duncan responded, and then, even from 30 meters away, I could read the coach’s lips as he leaned in even closer to say, confusedly, “What?” before trying to get Duncan’s emotions back in check.

The attentive referee — which witnessed the post-goal celebratory events — then came over to make sure Duncan was good to go for the ensuing kickoff…and then he too leaned in with a “Huh?”

Like everyone else, I leaned in with a, “What?”

So he finished the game — scoring the only two goals his team could muster — and we talked about it some more on the bench after the game.

Like, who taught you that word? Where did you hear it? And, though I didn’t actually ask him this, I was thinking, “Why is it in your day-to-day vocabulary?”

Made for a good laugh.

And then I looked it up.

And he used it correctly. In the right context.

blo·vi·ate | verb
talk at length, especially in an inflated or empty way.

David was, in fact, bloviating. Trash talking, being a blowhard, full of hot air, showboating, ummm, all bloviating.

Apologies were in order.

I apologized to Duncan for telling him that I didn’t think it was a word. I also apologized to his coach at the next practice, you know, since my kid was uttering words of the SAT variety during the heat of competition.

PIAC Addendum:
The team’s woes are a shame, really.

For the first time in youth sports that I’ve encountered since becoming a parent, there isn’t a single boy or girl on this team that isn’t trying their best and there’s something to be said for that,

There isn’t that one kid who’s always going the wrong way or the kid that’s more interested in looking at the sky while the game is going on. Or, ugh, the kid that only shows up for games and insists on picking the ball up with their hands…

Really, while some players are certainly better than others — like on ANY team ever — there isn’t a single player on this team that could be considered the weak link. Not one.

For their sake, I hope things start to click for them.

I hope that for the coach’s sake too. On it’s own, it takes a special kind of person to volunteer to attempt to rangle a bunch of 5-year olds.

Now imagine how exponentially more difficult if becomes if none of them are having fun.

Mortgage is Right on Pace