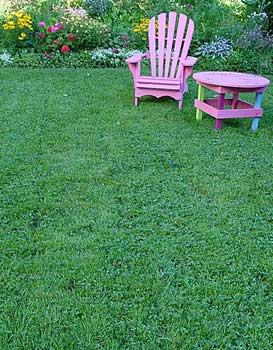 Over the years, I’ve probably spent well over $1000 on various types of grass seed, fertilizer, and new sprinklers in a feeble attempt to make my lawn look amazing.

Success has been, well, minimal.

My lawn looks pretty much like it did when I bought the place 14 years ago — some nice grass, lots of brown stuff, the occasional dandelion, that really tall mossy stuff, and bright green crab grass.

A mosaic, really. Nothing ever dies (even when I poison the crap out of it) and nothing ever spreads either. (The picture of my son practicing his shot is an accurate representation of my entire lawn.)

Not suprisingly, the lawn looks a lot like the lawn I had growing up, the one I was paid $5 each week to mow.

No green thumbs in this family, apparently.

Anyway, while doling out professional advice to a client, who Facebook friended me out of the blue and I then cyber-stalked online, I couldn’t help myself but to ask how she kept her lawn (that I’d seen in the background of nearly all of her Facebook photos) so green all the time.

Flattered and embarrassed, her one word response was…clover.

And that got me thinking…

The few really nice green patches on my lawn that always have the fat furry bumble bees hovering above are clover.

Growing up in the land of cul-de-sacs, which doubled as hockey arenas and baseball stadiums, there was this one house just beyond the “outfield” wall, err, curb where we’d get hollered at anytime a home run sailed into their, ahem, grass.

For real, the guy that lived there was tending his lawn daily and, frankly, you could tell.

Perfectly straight mower lines in a criss-cross pattern and bright green all of the time…right up to the first snowfall.

But I also remember sitting on that curb with our hands in the grass searching for four leaf clovers with pretty decent success.

And we used to “catch” those furry bumble bees in our hands there too.

(One time we made the mistake of trying to catch yellow jackets in the same manner behind home plate. BIG mistake.)

Thirty years later, I now know that guy was a total fraud.

He was mowing his lawn every single day so as to not EVER let one of those little white flowers pop out.

His ENTIRE lawn was clover.

So I ordered sixty-something pounds of clover seed and it should arrive sometime this week.

So, being that I google almost everything, I decided to look Augusta, Montana up.

I mean, this is really the middle of nowhere.

For real, I Google Earth’d it. Three bars, a diner, and some place called the “Bunk House”.