So, this morning, I read the news that Nancy Zieman died yesterday.

Back then, all junior high school students were required to take an “elective”, like Industrial Arts, Home Economics, or Art, or whatever, but since I was in the band, I was exempt from this requirement since band already counted as an “elective”.

Most kids in my situation — those in band or chorus — just took a study hall or open period.

No, I was a full schedule kind of guy so I signed up for “sewing”.

Now, before you start thinking I brushed elbows with Public Television royalty, no, Nancy Zieman was not my sewing teacher.

But, on the rare day that we’d have substitute teacher, they’d roll in the big A/V cart with the TV and top-loading VCR and play an episode of “Sewing with Nancy” for us. 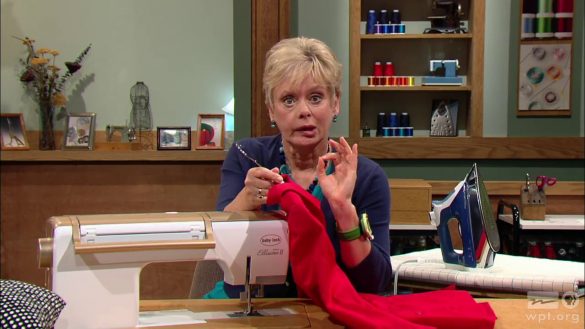 We’d sit and watch, totally uninterested, and then poke fun at Nancy’s crooked mouth or how she appeared to never, ever, blink for the next few weeks as any middle schooler would as we sewed together stuffed mallards and eagles and things from patterns clearly targeted towards kids.

I’m almost certain some of the pattern packages we were able to choose from even had her face on them. In my 7th grade sewing class, she was kind of a big deal.

I’d always assumed she’d had a stroke or was maybe blind and had two glass eyes or something but now, having read her obituary, I now know that it was Bell’s Palsy that caused her facial paralysis.

Anyway, though I’d only seen her show maybe twice…and that was over 30 years ago now… I never forgot her.

When I saw her face, in a tiny blurb on a website this morning, aged 30 years (though you could hardly tell), I knew exactly who she was and spent much of the day in a google/wikipedia wormhole learning more and more about her.

All told, it hit me far harder than it probably should of. Moreso than the other recent deaths of Robert Guillaume, Roy Halladay, or Tom Petty — all much, much bigger celebrity names.

I guess, first, it’s the realization that people from my own “youth” that I don’t picture as being “old” are, in fact, old enough to be kicking the bucket — Nancy was 64, so older than my dad was when he died — but also cause she seemed like a nice lady, you know, doing something she loved and getting paid for it.

I kinda strive for that — doing something I enjoy and making a living doing it. And being nice too.

I’ve no doubt that she was aware of the snickering going on within her semi-forced target audience (of students) but you gotta give credit — she didn’t care.

I mean, really, she looked like someone’s Mom, hosted a sewing show on PBS, talked a little funny, and never blinked. She didn’t have any of the traits of a 1980’s celebrity — easy fodder for middle schoolers.

But you know what? She was still taping episodes as recently as September. You’re clearly doing something right if you can last that long on television — even PBS — and I’m certain she was probably living quite comfortably as a result of her “hobby” turned business.

It really sucks that she passed away.

Of anyone, Nancy Zieman should’ve been able to sew into her 90’s.