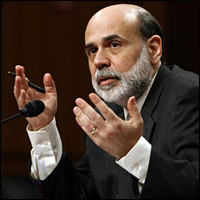 With the monthly net worth update looming in the next few days, I’ve got a pretty good idea of what it’s going to look like — granted Bernanke’s rate cut on Wednesday (Already? Why???) could sway the results.

Either way, October will end up being another month headed in the right direction. Problem is, most of the “gains” are coming in my 401k.

I guess that’s not a problem — it’s just not helping the debt reduction any. Untouchable income which, yes, is a good thing, is also like invisible imaginary income.

I look at the bottom line and see that I went up, say, $5k in the grand scheme of things. Hey, at that rate, I could wipe out all of my credit card debt in 3 months time. But my debt total hardly moved. And that’s frustrating.

I know I said that was going to be the new plan last week, but I haven’t implemented that plan yet.

But enough complaining about an increasing net worth… (Seriously, why am I moaning about that?)

The good news is that, by delaying the plan to boost my cash resources for another pay period, I’m ahead on my mortgage again. Next payment is due in January 2008, and that’s a load off of my shoulders. I generally like to have a buffer like that and there have been a few months where it’s been a little tight.

In other mortgage news, Countrywide did their annual Escrow Analysis on my account a bit earlier than usual this year and my payment has gone down around $40/month. While I’m not going to change my payment amount (I like to write checks for nice round numbers), it’s an additional $40 that will go towards the principal each month. Added to the $25/week I’m still throwing that way, that’s $140/month extra towards the principal, which according to Countrywide’s amortization schedule calendar will put me on pace to pay off the mortgage nearly 10 years early. No complaints there.

Anyway, the goals for November are to aggressively pay down the Bank of America Business credit card like I mentioned in the “Goal for the 4th Quarter” posting and increase my cash pile by paying the minimum on all of my other bills.

I guess that’s the Dave Ramsey method. Well, we’ll see how that goes…

Last week I mentioned that I’d set up an autopayment through my checking account to throw additional principle at my mortgage.

My lender, Countrywide, offers a few different auto-payment plans of their own, but they CHARGE for it?!

Bi-monthly payments get you a $4 service charge per payment. Total damage: $96/year.

Weekly payments have a $2 service charge. Even still, that works out to $104/year.

Makes you wonder why they don’t just come out and say there’s a $100 charge for the service… Oh yeah, because then they wouldn’t have any takers… The funny part is that they describe it as a “nomimal per draft fee”.

Maybe I’m just cheap, but $100 is hardly insignificant. Especially when just slightly more than that amount goes to the principle with every regular mortgage payment I send in. Countrywide claims that enrolling in one of these plans is like making 13 payments per year. But… subtracting interest and escrow, they’re taking one of those payments right back out in fees… It’s a terrible deal.

So, last week, I came up with the brilliant scheme to initiate payment from the opposite side — through my checking account at Bank of America by utilizing their BillPay system.

To test things I set up an automatic $25 transfer to go to Countrywide each Monday. This morning, on the Countrywide website, my transaction history indicated a $25 reduction in my principle. Woo-hoo!

Now, I don’t think this would work for paying my mortgage each month, since the payment went towards the principle only, but that was never really the plan anyway. I’ve no problem mailing a check in each month, but this will allow me to paydown the loan even faster without a fee or a noticable void in my wallet.