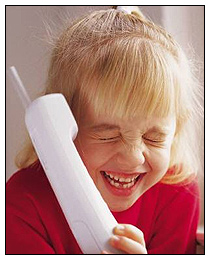 So, this morning in the shower I was remembering back in the 1980’s when crank calling was still considered “innocent” fun. All the cool kids were doing it.

I’d imagine it’s a lot harder to do now with everyone having some sort of Caller ID service these days — and quite honestly, you’d probably be labeled as a terrorist and end up detained in some secret foreign prison for committing such a crime.

Not being “daring” enough, I never actually made a crank call. Actually, I just wasn’t mean enough and we *never* made a call from my house, but I do remember ‘our’ script.

I don’t remember if we made it up (My friend Brian would get credit), or he heard it somewhere, but it generally went like this:

Some real high brow humor there.

Still, to this day, or maybe *just* today, it cracks me up.

I remember in the instance that the person did have a dog — we never had an alternate ending prepared. We still said, “I don’t have a backyard,” which is so ridiculous in hindsight, it almost makes it funnier. Am I alone in the room?

Anyway, I think it’s sad that this specific form of youth mischief has disappeared from society. Think of how huge it could be with all of these little kids sporting their own cell phones these days!

But nowadays, I guess kids get their kicks by spray painting swastikas on random cars. My, how far society has come… or fallen.

I miss the days of the innocent prank call.

Over the weekend, while grooving to bad 80’s tunes in the car by myself, I was blinded by, well, a blinding flash of brilliance! You know, one of those moments of true clarity every brilliant one has from time to time.

Suddenly, it hit me — I had a vision of toasters with wings. Less than a second later, I thought, “Hey, wait a minute, that’s totally been done.” But while pondering it over the next few minutes (okay, I’ll be honest, I thought about it for well over an hour), I couldn’t help thinking about what happened to the once popular flying toasters.

It took me a bit, but I eventually found the brain cell that had been holding the name “After Dark” for all of these years just for this very moment.

After Dark was the company in the very early 1990’s that somehow managed to convince computer users to shell out $30+ clams for a silly screensaver. They probably made a fortune — of that, yep, I’m jealous.

I think of stuff like flying toasters all the time… I just don’t have the type of mindset to market them effectively. I mean, really, I’d like to shake the hand of the guy who came up with the idea of a flying toaster and then thought, “Hey, this should be a screen saver. We’ll make millions!” I hope it was the same guy that came up with both ideas. Genious.

Anyway, hats off to the Flying Toaster of the early 90’s. I miss the days when the screensaver you had made you more, I dunno, sexy?

Can geeks be sexy?

You betcha. In 1992, if you had some toasters flying across the screen, you were the talk of the town. Or library… Computer lab? Sigh…