I’m now four weeks into to my 20-week auto loan payback plan and, while I stumbled out of the gate and ran out of money early on, things are feeling pretty good right now.

Just knowing that I’m 20% of the way there, already, has me motivated to keep going and I think I’ve managed to settle in to this new budget.

To date, I haven’t been able to send in an extra dime over what I’m already aggressively paying down on a weekly basis but I’m sure that as the balance remaining falls within a striking distance, I’ll be able to scrounge additional funds somewhere to rid myself of my largest monthly non-mortgage expense. 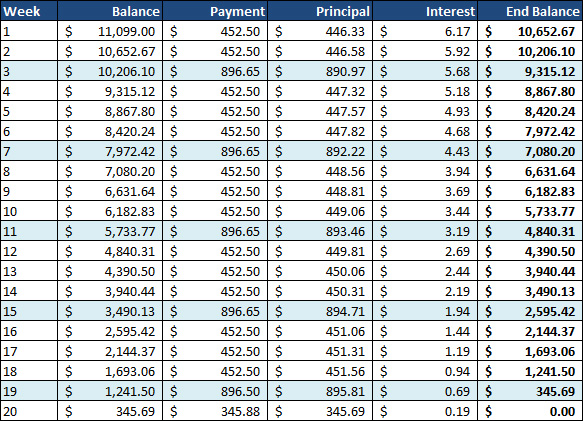 In the past, I’ve documented how making WEEKLY payments instead of monthly payments can really drum up some extra motivation when it comes to paying your debts.

Instead of being saddled with this car loan for what feels like an eternity — I can eliminate it completely in… 20 weeks.

Twenty weeks versus three more years. Yeah, that gets me pumped to get started.

Okay, so that’s a bit longer than the original 3 month window that I proclaimed I’d wipe it out within but 20 weeks will be my baseline.

I still think I can squeak this one sooner than that with a few more extra payments here or there. My red zone mentality will take it up a notch as I near the finish line.

Now, don’t get me wrong and don’t think I’m just super wealthy or something… The ability to pay $452.50 per WEEK to an autoloan blows my mind too. That’s A LOT of money.

Based on my perceived comprehension of my biweekly paycheck and my monthly expenses — I certainly don’t have an “extra” $452.50 each week to toss around.

While you may not think you have much “extra” money available to attempt an aggressive pay down like this, chances are — if you follow a rigid plan — you’ll find that you actually do.

Apparently, while I’ve been financially in cloud cuckoo land for the past few years, I’ve probably been blowing the near equivalent of $452.50 per WEEK on incredibly stupid stiff like gummi bears and dirty polyester.

Okay, that’s not entirely true (most of the time) but you get the point.

Even $25 extra per week makes a HUGE difference on something more long term like a mortgage — the key is that you need to do it weekly. WEEKLY! And stick with it.

Okay, so it’s been a bit…and for that I apologize but I’m getting excited about paying down debt again.

Seems that once I reached my goal of being debt free, well, the excitement my finances brought kinda waned.

Hey, I’ve never wavered from the fact that I’m a lot more skilled at paying down debt than growing savings…

Anyway, as you may have already guessed, I’m carrying a considerable amount of debt again so it’s time to put my head down and eliminate it…again.

Let’s get down to business.

Briefly, a rundown of my current debt situation is this:

And here’s the plan…

Though the credit card has the lowest balance (which would take almost no time to eliminate) and the highest rate (which means it’s costing me the most to carry), it’s not my primary target.

Reason being, its minimum monthly payment is tiny so it has almost zero effect on my budget.

Yeah, it sucks paying finance charges each month but I can totally handle an extra $26 or so tacked on to my balance each month.

The mortgages are what they are.

Did you remember that my primary mortgage payment comes in at under $500 per month? Yep — my housing payment is amazingly low for a four bedroom house.

So low, in fact, that during my blogging hiatus, I took out a home equity loan to help finance that garage I’ve been talking about for so many years.

It’s not built yet…but most of the money to get it done is already in place.

So, as I’ve repeatedly stated in the past, there is ZERO benefit for me in paying down the primary mortgage at an advanced pace and the second mortgage balance doesn’t cause me sleepless nights either though that’s likely due to the fact that I still have the entire balance sitting in a savings account (so it really doesn’t feel like debt…yet).

So that leaves the auto loan…

Remaining balance on the loan is $11099 and the monthly payment is $444.15. Interest rate is 2.9% which, unfortunately, is the highest interest rate I’ve ever had on an auto loan.

This loan originated back in April of 2013 when we bought the Swagger Wagon to replace my beloved (in a nostalgic sort of way) Land Rover Discovery. Original balance was $24k.

Having never lost my love for paying down debt quickly, I’m so far ahead on this loan that I don’t actually have to make another payment on it until April 2016. Yeah, an entire year.

That said, it’s minimum payment (not that I need to pay it or anything) is pretty chunky in my opinion.

Sorry — paying almost $450 per month for a $12k balance just rubs me the wrong way…so I want it GONE.

Ready for this? My plan is to have it PAID OFF in four months.

The method of attack is tried and true for me — every last dollar goes to paying this off.

And that’s okay because once the auto loan is paid in full, the credit cards are next and within striking distance of a full payoff the following month leaving just the mortgages.