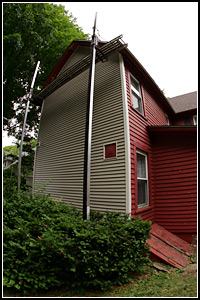 I should have done this a long time ago.

Yesterday, when I arrived home from work, I found that the back of the house had been sided. Wow. Not sure I really expected it to begin so soon, but I’m not complaining either. I’m just glad we have the funds in place to make the remaining payments already.

The colour looks a lot better than I thought it would. I was a little skeptical… I dunno, I thought it might be too dark, but it’s not, it’s perfect. And the improvement is so drastic; I can’t imagine why I held off having this done for so long. Oh yeah… the cost.

On the negative side of things, it’s not seamless vinyl siding. I kinda knew that going in, but amazingly I’ll admit it’s not that noticeable. Maybe it’s the shock value of the house not looking like crap any more that makes me gloss over the seams, I don’t know.

Another thing I don’t really like is how plasticy and semi-squishy the side of the house is now. Again, I knew that was going to be the case going in, and it’s also the reason I’m not real fond of vinyl siding, but the difference in curb appeal will totally be worth it. Still, someday I hope to have an old home with read wood siding — and in great shape. It just would have cost too much to restore and maintain this one and make it look the way I want using all wood.

The contractors have been good so far — a definite improvement over the roofers. I’ll hold off on a final ruling because the roofers also appeared quite good until the last couple of days when they tore most of our screens, put a brick through a window and onto the hood of our car, and on top of it all, they left a dumpster in our front yard over the Christmas holiday (even though the project was complete over a week beforehand).

On the back of our house, there is an exhaust port for a fan in our kitchen. Basically a little spring loaded trap door, when it opens, the fan turns on and sucks whatever out of the kitchen. Well, they obviously tugged on the trap door from the outside and broke the chain that keeps the door shut — and the fan turned off — so when I got home, the door was shut, but the fan had been running for hours.

Thankfully, it was an easy 15 minute fix. No damage done.