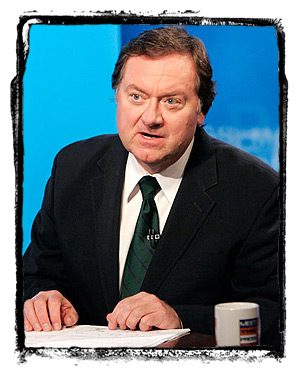 I’ve never been much of a flag waver. Waving a flag around doesn’t make you patriotic.

I dunno, I guess it’s just not my style, but to me it doesn’t seem to symbolize much more than a nationality — like at the Olympics or something.

I guess, in that respect, I’m a little like Barack Obama — sorry Dad.

I think Obama’s changed his stance though — poll numbers will sadly do that — but I think he now wears one of those little American flag lapel pins. They’re probably made in China.

The whole Tim Russert thing yesterday hit me like a ton of bricks. I’m not really sure why. It’s not like I knew him or anything but it still kinda ruined my day.

I think it was his enthusiasm that I enjoyed most — one of the main reasons I watch NBC News with Brian Williams each night. Again, sorry Dad.

I’ll never forget, it was a night only around a month ago, where NBC obviously didn’t have a graphic ready for Clinton/Obama delegate totals and Russert broke out a big whiteboard and started drawing away and underlining things.

His arm was in the way as he was writing and talking, err, stammering, as he often would — it looked and sounded ridiculous. I’m pretty sure his math was incorrect too (making the whole scenario even funnier), but it still made the point.

They keep showing his “Florida, Florida, Florida” clip from the 2000 election, and while that may have been one of the first white board appearances, it was far from the best.

I was really looking forward to his reactions to the VP selections that I suspect will come in the next few weeks.

Obama’s a sure thing if he picks Hillary Clinton. That sucks for him. It would be a tough decision because I’m sure he really wants to be President — and he’s got a definite route to get there, but would it be worth it? Nothing against Hillary, but the whole “Dream Ticket” theory is just a bad idea.

From my stand point, I can see John McCain going stupid and selecting someone like Joe Lieberman (a proven loser) from my home state.

That’s right, Joe, you lost with Al Gore and you even lost to the unknown Ned Lamont. In fact, as a result of the latter, you shouldn’t even be in the Senate anymore…

In any case, if McCain announces something like that first, Obama can pick anyone he wants and still win.

I think Colin Powell would make for an interesting selection. No, not because it’d be two black guys running for the highest office, but because both tickets would be split affiliations.

Lieberman and Powell both screwed over their former parties.

And, in comparison, I think Powell brings a lot more to the table (for Obama) than Lieberman (brings for McCain). That and the newscasters can gush over themselves and an all-black ticket.

Best of all, an all-black ticket headed for the White House would, in essence, end the careers of perpetual racists Jesse Jackson and Al Sharpton. That would be a good thing.

In the end, politics aside, I hope Andrea Mitchell doesn’t take over Russert’s on-air post… She just doesn’t have it — whatever “it” is.

Oh, and is it just me, or is it odd that Google doesn’t have a special “Flag Day” graphic today?

Seems every other day lately they’ve got a painter or an architect I’m unfamiliar with showcased within their logo. Today’s a pseudo-holiday that I’ve actually heard of and they’ve got nothing…

Personal Property Taxes Are (were?) Due