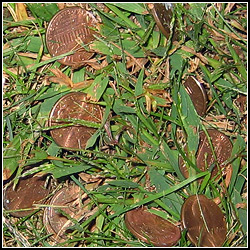 This evening I decided to mow the lawn and at one point it sounded like I’d run over a rock or something.

As I made my next pass, it happened again.

Now, an occasional rock in my lawn is nothing unusual but two in the span of two passes, well, that requires a closer look.

And upon closer inspection, it appears that my lawn is growing pennies.

This was a pretty exciting discovery for me.

So exciting, in fact, that I rushed inside to get the camera to take a picture. Yeah, that’s a real photo.

In total, I’d say that there’s at least 50 cents spread across 10 square feet. Not exactly a jackpot, but it’s still a pretty decent crop.

I’m hoping that eventually they grow into nickels, then dimes, and can you imagine quarters!? Wow, that’d be sweet…

One thing is for sure, though… a new lawnmower will, unfortunately, make for an expensive weekend…

Stereotypes in the Parking Lot… And Christopher Lowell too!