So all of this talk on the news about people losing their credit has finally hit home.

Apparently, based on the date of this notice I received from Bank of America, I was financially assaulted on April 24.

Seems that they held off on mailing the notice out, though, as I just received this on Thursday or Friday (and I only opened it this morning.) 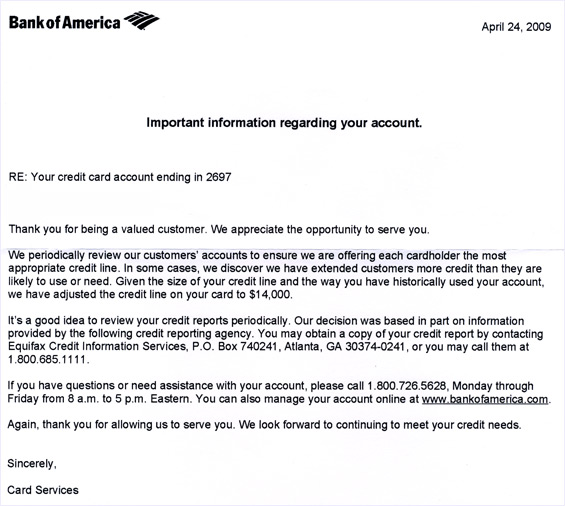 Given the size of your credit line and the way you have historically used your account, we have adjusted the credit line on your card to $14,000.

Looking back on my last Credit Card Roll Call from December 2008, my credit limit on this particular card was $27,400.

A ridiculous limit — no question. But they cut it in half?!

I’m not really upset as I haven’t carried that card in my wallet since 2005, though I’ve still put my monthly cable bill on it since that time just to make it appear to be an “Active” account to the credit card company.

Historically speaking, I’d say that proves that I do indeed need a higher credit line than the one they’ve “adjusted” me to.

And they claim that the decision was based in part on a credit report that they pulled. I find that a little upsetting too.

First, the fact that the pulled a credit report — not to offer me something but to take something away that they’d already given me. Sorry, that rubs me the wrong way.

And though this was probably just a soft pull and won’t affected my credit score at all, the lowering of my limit by so much most certainly will.

It also baffles me a bit because I’ve seen my credit report and what I saw shouldn’t have resulted in this.

According to Experian, I have 17 open accounts, all in good standing, and not a single account with a late payment. They also listed that I’m a pro at carrying HUGE balances.

Listed alphabetically, my BMW Financial Services account was right up top. How many people do you know that can afford not to carry a huge balance on a BMW ? I’m certainly not one of them.

Though most my accounts were holding steady at $0 when I last pulled it, the credit report also listed when and what the high water mark was for each account — and it wasn’t that long ago that nearly all of them were well over 5-figures.

Basically, between 2004 and 2006, I was pretty deep. “Historically” speaking, that wasn’t a very long time ago.

Of course, though, the notice from Bank of America states that they based the information on an Equifax credit report.

They’re the only agency that I haven’t seen my credit report for because, well, their website sucks.