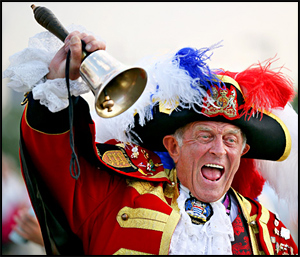 That said, while the concept of “Royalty” is kinda quaint and romantic, with each passing generation, it gets sillier and more antiquated.

I’m sorry the old man in the clown suit unintelligibly shouting something about a baby boy was hardly newsworthy… Wait, what? A town crier? That’s what that was? Oh, my mistake.

While I’m all for tradition, there are some things that should just be left in the past. The Town Crier is one of them.

And so is the silly easel behind the palace gates.

To their credit, I am glad that they put out a press release prior to the silly thing being put in place.

Sadly, the press release probably went out after the clown did his thing on the hospital steps.

Anyway, I have serious doubts that this little guy’s image will *ever* appear on the currency of any of the countries among the Commonwealth of Nations.

His father probably won’t be on much of it either.

Going broader — and relating to currency — the U.S. might want to think about changing up the people on the currency.

Like the Constitution, much of which barely relates to anything relevant today, folks like Alexander Hamilton should probably be shelved.

How many Americans even know who he is?

Or which bill he’s on?

And even though the guy on the dime is relatively contemporary in comparison to the others, it’s almost as if no one knows who he is at all… Crazy — 4 terms as President of the United States less than 100 years ago and over 50% of the population have no idea who you are…

I’ll be honest, though… I’ve always though the profile on the dime was a better likeness of Pope John Paul II.

Anyway, they took the Eagle off of the quarter a few years ago when they started doing the State thing — how they managed that is a mystery — let’s go all out and get some fresh designs in order…

Oh, who am I kidding… Bitcoins are going to replace it all anyway before long…

Spending Report for May 2009