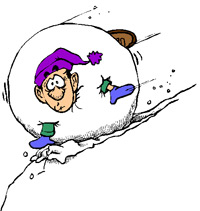 Through Happy Rock‘s blog, I found a debt calculator that actually peaks my interest.

It’s based on the Ramsey snowball method, which I’ve sort of done in the past, but not really. I tend to try to pay down all of the debts at the same time. Sometimes it works, sometimes it doesn’t.

Eitherway, it’s a lot easier to just punch the numbers into this calculator from What’s the Cost than it is to set up your own cryptic spreadsheet. That’s the route I’ve always taken… until now.

The one feature regarding introductory rates doesn’t seem to work correctly, but that’s really not an issue in the grand scheme of things. Finally… a calculator that isn’t just the same old recycled drivel…

I plugged in my numbers and things look good. I’m motivated to get things rolling on the fast track again. Even printed it out and taped it to my desk at work right in front of my keyboard.

I think I’ll stick to this schedule, with one exception. I’m still planning to pay off the Bank of America card in full by the end of the year. This schedule has it being paid off in January.

And, just think, this way I’ll be done even sooner!

Fell off the Wagon…