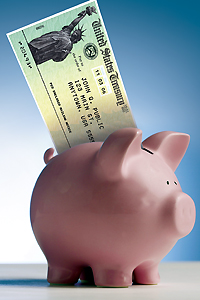 Okay, so yesterday I mentioned that we filed our taxes over the weekend and we’re due $2643 Federal and $801 State. Not too shabby.

I know, I know… That’s like giving the government an interest free loan.

But we have our reasons.

It’s the patriotic thing to do.

No, actually, the primary reason is that we don’t pay taxes on our income from the side business.

That’s not such a big deal when you’re bringing in a couple thousand dollars per year, but over past 3-4 years, we’ve been bringing in around $5k more per year each year.

That makes a huge difference when the 1099-misc’s start to roll in during tax season and you realize, oh crap, we didn’t pay taxes on $30k worth of income?!

So to compensate, we increased the amount withheld from our paychecks from our “real” jobs to cover much, if not all, of the difference. Make sense?

That worked out to be $21 dollars more than I’d calculated when I did the math 10 months ago. (As luck would have it, we made almost exactly the same untaxed amount in 2006 as we did in 2007.)

With the math having come out as I’d expected, and the two consecutive tax years being so easy to compare, I now feel I have a pretty good grip on how taxes work and how to make the most of my money.

But now, we’re in the process of shutting down the business, so the untaxed income won’t be anywhere near what it’s been in the past.

So really, we should readjust our tax withholdings — reduce them — but not yet.

And while I’m not really a fan of giving the government an interest free loan, I’m also not opposed to a nice check each February/March.

As for this year’s check? Well, let’s just say that credit card debt that’s been a thorn in my side will be gone sooner than you know it…