CLOSE
Home Finance Moment of Clarity: When I Figured Out How to Fix my Finances 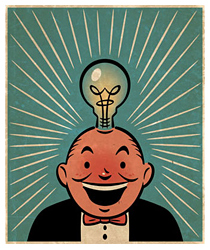 How did I find myself in this situation? How did I dig a hole this deep? And how on earth did I climb myself back out?

With tomorrow being a payday, the lull in my debt repayment plan is finally coming to a close. I’m pretty excited as it will give me the funds to be able to pay off the very last of the credit card debt. For good.

It wasn’t until after I’d bought my house in 2002 that I started to keep a detailed record of my credit card use. In the past, I’d always known what my balances were, but I never really kept track of how they got as high as they did.

Five months later, even though I was paying back at a clip of over $1250 per month, the balance had ballooned to $26145.56. I was headed in the wrong direction, but now I finally had visual proof of how wrong a direction it was.

I set up my first auto-payment in October of 2004 to start rapidly paying down an MBNA card that I no longer used. By February 2005, I’d wiped out a $3500 balance. At this point, I’d never even heard of Dave Ramsey, or snowballing, but I was essentially following his plan.

With one card out of the way and off the spreadsheet, I very foolishly opened a new account and used a balance transfer to partially take out the next target on my debt payment plan. In the long run, and even the short run, this line of thinking backfired. Instead of one bill for one card, I now had two bills for two cards and both had sizable balances.

I plodded along for the entire 2005 calendar year. In the end, I’d wiped out three different credit card balances but my total balance was still $18479.20.

This is where I failed. While I had a solid plan to pay down debt, I didn’t have a plan to stop accruing it.

The next year didn’t get any better. I still hadn’t figured it out. I stepped up my repayment plan but still found myself deeper than when I’d started. By March of 2006, I was carrying $24184.37 in credit card debt all at rates higher than 17.99%.

My minimum payments were nearly $500 per month.

My monthly finance charges were exceeding $250 per month.

By this time, I was sending $3k every month towards Chase, MBNA, and Bank of America but was only treading water. I couldn’t understand it.

I decided that my last big expense on the credit cards would be an engagement ring. And with that done, it was time to start eliminating the balances. No tricks. No gimmicks. No balance transfers. Just huge weekly auto-payments.

And you know what? It worked!

By January of 2007, I’d wiped out all of my personal debt and only had a balance of $8962.39 on a business card. Things were definitely looking bright, but as with all things in life, a setback was on the horizon…

Unable to get a home equity loan (which turned out to be a blessing) because of our insurance situation, we took out a $12k loan at a high 15.5% rate to finance our roofing project. Six months later, we would finance over $20k of our siding project using credit cards.

Before I knew it, I was back over $20k in debt again. That’ll take the wind out of your sails.

But there was a big difference this time. Spending was, again, the culprit, but this time, they were more intelligent purchases. And this time, I had a plan, already implemented, to pay them off quickly.

It was also around this time that I decided that just eliminating credit card debt wasn’t good enough. It was time to really build some wealth at the same time.

I remember what sparked that vividly. I had been reading various PF blogs pretty regularly at that point, but never really “connected” with any of them. I dunno, none of their numbers seemed real or obtainable to me. Just interesting reads with some good financial advice here and there.

A co-worker had just purchased their first home. Financially, I wouldn’t say that I looked up to this person. Morally? Definitely not. I don’t even really admire their work habits. But they did mention how it “sucked” to have taken over $35k out of savings to make the down payment.

My jaw hit the floor. That’s impressive. Didn’t see that one coming. Total shock. In all honesty, yes, I was jealous.

I’m a guy who’s checking account rarely exceeds $2k and has virtually nothing in savings. I’m still that guy. But I’m not going to stay that guy.

See, I admittedly have a bit of an ego. I keep it pretty well sheltered, but it’s there. There is no way I can just cruise along in life the way I have been when people like my coworker have managed to save up that kind of money. No way.

Things were going to change. And they did. Immediately.

I took my repayment plan up a notch.

I took all but one of my credit cards out of my wallet.

I increased my 401k contributions, twice.

I finally looked into Dave Ramsey’s snowball plan and implemented it.

I started paying down my mortgage, first with an additional $25 per week, then increasing it to $125 per week plus a $25 biweekly payment from my wife.

Even with the additional mortgage payments and increased 401k contributions of late, my current pace still exceeds $2000 in debt repayment per month. Best of all, spending is not longer the problem it once was.

Doing the math, I’ll de debt free by the mid-summer.

And then the savings will commence.