CLOSE
Home Life Best Buy is the Worst Store EVER! 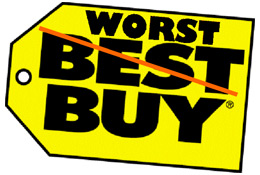 It may be a few months too late but I’m just now beginning to feel the effects of the demise of Circuit City.

My wife and I are in the market for a new telephone. Our local Walmart — if you can believe it — doesn’t carry anything but cell phones now. No joke.

If I wanted an honest-to-goodness telephone from there, I’d have to tear down one of those customer representative phones mounted to the walls. Unfortunately, I’m not exactly looking for a phone that will allow my voice to be heard throughout the entire house (clean-up in aisle, err, bathroom two), so…

I was beside myself. How could Walmart not have a single phone?

For heaven’s sake, you can buy a GUN there but you can’t buy a telephone? What does that say about the direction society is headed?

So off we went, reluctantly, to Best Buy.

First of all, their aisles are too narrow. Many of the folks who play video games (and frequent the store) are a little bit wider than the rest of the population and if you get bookended in an aisle, there doesn’t seem to be a discreet way of escaping. I’ve found this situation unique to Best Buy often fearing for my life should these two huge people attempt to cross paths with me innocently stuck in the middle.

Secondly, I don’t think the employees work on commission but they certainly act like it. The entire time in there I feel as if I’m being circled by sharks.

“No, I’m just looking, thanks… And really, you were standing close enough to hear that I was just questioning out loud why anyone would want to pay over $100 to have their cellphone mounted to the side of their head? I think it’s pretty apparent that I’m not in the market for a bluetooth headset…”

Of course, I usually keep that second part to myself.

So we finally find their limited phone section in the back corner of the store.

They very conveniently put one of those sets of stairs on wheels right in front of all of them. I tried to move it, but apparently it was locked in the “brake” position. Nice… So far this has been a wonderful shopping experience.

So climbing through (not up) the steps, I finally got my hands on some telephones. Since they’re apparently such low budget items, none of the employees disturbed us. That was nice. We settled on a sufficient Panasonic model that had a answering machine built in for around $70.

Looking below, under the samples, were the boxes would have been, there was just a jumbled mess of random phone boxes. We went through every box and came up empty handed.

Naturally, they did have the same phone we wanted available in a package that came with four receivers but I wasn’t about to spend that much for what is essentially our secondary phone. And what would I do with three extra receivers?

Disgusted, we left the store — and this brings me to what I HATE most about BestBuy.

They treat every single customer as if they’re a shoplifter.

The minute you walk in the door, you may have noticed that they don’t have a greeter like other stores do.

Instead, they have a loss prevention person right up front, semi-greeting you, but more often than not, they’re just following the most attractive woman in the store using the cameras or spying on the shady looking guy with the baggy pants on that hardly cover his ass.

Now I’m not against having a loss prevention employee (like the fake shoppers that department stores have) or even an effective use of the camera system but in full view of the public? C’mon? The first thing I see when I walk in the store is some pimple-faced teenager with an authority complex spying on people.

It’s not very inviting. To shoplifter or the law-abiding customer. I’m pretty sure the latter outnumbers the former by at least a 500:1 ratio.

Their “out-in-the-open” methods just might deter a few criminals, sure, but they also turn off a good number of customers too…like me.

So when you attempt to leave the store without buying anything, the look this employee gives you as you try to cut past the checkout — it’s like the stink-eye — is what puts this store lower than any other store out there.

If I were the type to make a scene, I would.

Hey pizza-face — If I were a shoplifter, guess what, you missed me cause you were too busy playing your Peeping Tom game.

That’s right, I saw you checking out the bimbo with the artificial d-cups who is old enough to be your mother when we walked in, which, if you’re unaware, and you obviously are, every single person walking in the store can see exactly what you’re up to because there’s a window behind you…

Embarrassed? I thought so.

And the real reason that I’m walking out of your crappy store empty handed is because you never have what I’m looking for in stock, your prices are too high, and your overly aggressive service sucks.

Oh, and are these big magnetic alarms at the exit just for show or are *you* the alarm system?

Then I’d just stand there waiting for a response.

We drove to a second Best Buy in search of the phone and repeated the entire process.

Trying to Keep My Spirits Up