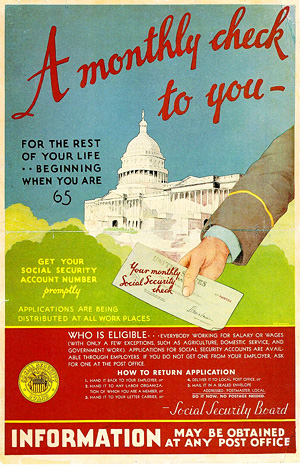 As we stumble into another election season here in the US, the fact that the senior citizens are generally the largest voting block (and dictate who actually wins) is really starting to scare the crap out of me.

Whether it’s my parents, my friend’s parents, or even the interactions I’ve had with the dinosaurs that attend our imaginary government meetings (the meetings aren’t imaginary, the government is — it’s complicated), I can’t help but notice how differently they see things and how, well, out of touch they are with how things work these days — simply because they don’t need to stay in touch with how things work.

The first thing I think they’ve lost touch with is this whole healthcare issue that has been in the news for the past few months. Yeah, yeah, I know they’re all over the whole medicare side of things (for their own reasons) but they can’t understand why the “younger” set is by-and-large upset with the wacky costs associated with health insurance.

In my own situation, I’d consider myself pretty well off. My wife and I both have full time jobs and both offer health insurance. It sounds like a pretty cushy situation but we’re still paying around $15000 per year for insurance — and this isn’t for some special elite plan. I don’t think the average senior realizes that it’s that high of a number — it wasn’t during their working days.

Yep — using an average household income of $50,233 (2007 numbers), healthcare is costing us nearly 30% of our PRE-TAX income. You can’t deny the percentages — the average American household wasn’t blowing 30% of their pre-tax income in the 1970’s and 1980’s unless, of course, they were a really unhealthy family.

The crazy part in my own personal situation is that I haven’t been to a doctor in over a decade. Do the math… Yep, I should have an extra 6-figures in my pocket. It’s highway robbery. It really is.

Now I’m not saying that a government plan is the best option (even though I am Canadian and do, in theory, support such an idea) or even a solution, I just think that there’s a HUGE segment of the voting population that are completely unaware of what the younger folks are paying, not for services, but for just-in-case insurance. It’s not right.

The next thing is the whole concept of a 401k plan. I’ve heard two or three people over the past couple of months someone say along the lines of, “Yeah, well you don’t need pensions because people your age have 401ks…”

I don’t know about you but there are an awful lot of companies out there that don’t even offer 401k plans — I’m pretty sure that most of my friends have nothing of the sort. And even if they do, good luck finding a company that *still* offers a match — sometimes I even have to laugh that employers call it a “benefit”.

Using my own 401k as a real life example : I’ve been contributing to it pretty heavily for a dozen years to receive the largest possible employer match (from when they were *still* offering a match). You know, basically making the most of it that I possibly could.

My total balance right now is right around $79000. Fourteen thousand of that is from my employer — or a little over $1000 per year over my 12 years of contributing.

You can throw phrases like “compound interest” or “tax deferred” in there all you like, there is NO WAY that anyone can claim that $1000 per year over a 25-30 year career (if you’re lucky) is going to be enough to “retire” on.

The fact is — employers aren’t going to take care of their “former” workforce like they used to and calling a 401k plan a “retirement” plan similar to a pension is, well, like comparing apples to asparagus. One tastes like crap.

That’s right Mom, I still don’t like asparagus. I think, at this point, it’s safe to say that I never will.

So, from my employer’s contributions to my 401k, I might end up with a $200 check each month for a few years once I retire… And don’t forget — I’m at that unfortunate age where I won’t be getting any social security checks on top of it all either… Ouch.

And on the subject of fixed incomes and social security checks, what is up with the seniors getting all upset about not getting a “raise” in 2010…

Are they as out of touch as Wall Street?

Maybe my job sucks but I’m pretty sure that I’m not alone — I haven’t gotten a raise since 2003. It might even be as far back as 2001 but plain and simple, right now, I’m certainly not expecting a token raise anytime soon, you know, just because…

Really, everyone’s cost-of-living has gone up (I personally haven’t noticed) but those still lucky enough to be part of the workforce aren’t seeing the “adjustments” that the seniors have come to expect. It’s messed up — the seniors need to get in touch with reality on this one.

Again, like the 401k/pension thing, that isn’t how things work anymore — people don’t get token raises just because…

But in the end, it’s really funny to me as I can’t deny that I’ve jumped the bandwagon before and said stuff like, “Yeah, the bratty Gen Y’s out there just expect everything to be handed to them…” but now I’m seeing first hand that AARP members are just as expectant of handouts.

Weird how perspectives change… or fail to change… Seems that every generation can fall into that often mocked me-me-me category indicating that one thing is for certain — we’re not all in this together.

Seems nothing can be simple…